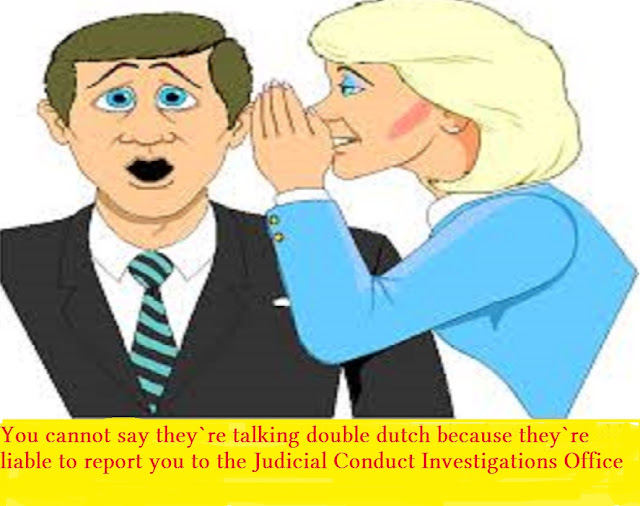 The last month of the year brought the usual reprimands and sackings of Justices of the Peace from the Judicial Conduct Investigations Office.  Only two J.P.s were dismissed for failing to meet the minimum sitting requirements. This is not exceptional.  Once again a sleepy magistrate was reported to the beaks who issued him with a reprimand. Of slightly more concern is the case of Mr Chrys Perera JP and Mr Shaf Ahmed JP.  This seems to border into intrusion where the powers that be have indicated that in and around our courtrooms is the most political correct area of our country.  It can only be speculation about the content of the reported conversation.  It begs the question as to where do the supposed private and confidential opinions of magistrates justify such  disapproval.  Presumably the offending words were uttered within the confines of the court building but if they were overheard by a clerical court worker in the car park would the two men have still been subject to disciplinary action?  When does political or social positioning become untenable for a magistrate?  Cases like this one and it`s not that unusual, raise considerable unease for the wider implications. The sacking of Mr Jonathan Sandford now a former JP is much more straightforward.  One can only raise an eyebrow or two at his stupidity.

In my post of 20th July 2015 regarding magistrates brought before the JCIO  I wrote, "In 2012 14 J.P.s were involved.  Of these 6 were removed by reason of being low sitters and therefore not fulfilling their obligations when appointed. 8 were  removed from the magistracy.  Notably there were none who were merely given "advice" as to their conduct or were reprimanded.  Similar numbers are recorded for 2013.  7 were sacked for not meeting the minimum sitting requirements and 3 were removed for other reasons. Once again there were no complaints that resulted in non dismissal decisions.  All that changed in 2014.  There were 40 J.P.s investigated of whom 7 were sacked for low sitting and a similar number was given "advice" as to conduct.  The major change was that 24 were reprimanded over their conduct which seems largely to have been misplaced comments usually within the court or retiring room".

From the above figures alone there are now two conclusions:- either J.P.s are, in increasing numbers, using language which is deemed unacceptable or there are more J.P.s than ever who are intolerant of language that has been previously deemed as normal.  There is however the get out of jail conclusion that language that has always been acceptable and still is acceptable to the majority is unacceptable to a vociferous minority.  This is of particular interest considering the subject of my post yesterday. Readers of course will draw their own conclusions.