THE ROLE OF THE MAGISTRATE AS SEEN BY "TRANSFORM JUSTICE" 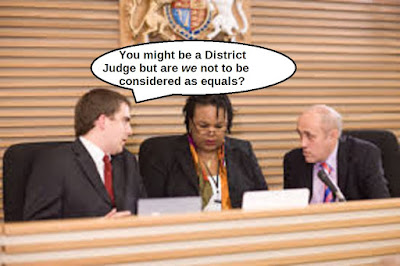 Regular readers here will be aware that I am rather less than optimistic that the function of lay magistrates will, a decade from now, be similar to the current position particularly in presiding over the court.  Pressures are being applied to persuade them, with of course the support of the obsequious Magistrates Association, that functioning #1. as single arbitrators outside the courtroom and/or #2. as wingers in a court presided over by a District Judge, is where the future lies.  The chimera of doubling sentencing powers to twelve months custody is an illusion under the current system. IMHO that will only be realised when option #2 is simultaneously in operation.  But what do I know?  I am only a retired J.P. indulging myself.

Someone who isn`t, is an ex J.P. Penelope Gibbs who runs a most thought provoking organisation; Transform Justice. Unlike me she is a professional student of matters such as those mentioned above. Her January report The Role of the Magistrate is certainly worth a read.  Personally I do not agree with some of her recommendations or conclusions but  she does present arguments which require analysis.