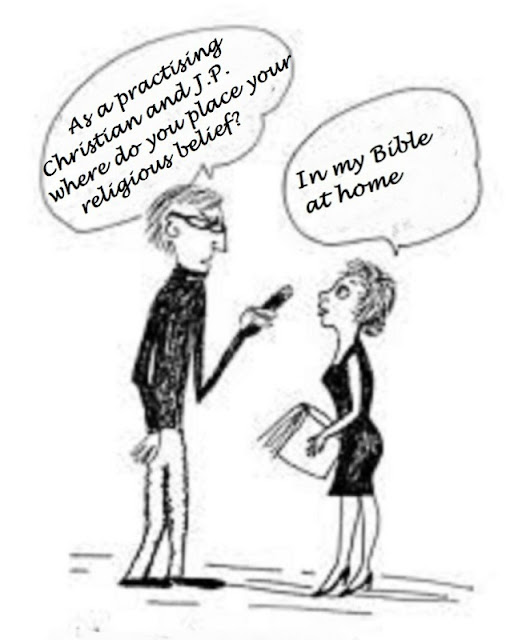 From time to time over the last few years I have commented on the numbers of magistrates removed from office. I have also alluded to the reasons that such drastic action was taken.  The interface between law and religion has occasionally also been a subject for comment as has the almost unfettered selection of jurors in the crown court where extreme or not so extreme religious views might influence decision making.

All these points to a greater or lesser degree seem to encompass the case of sacked J.P. Richard Page; a practising Christian. In 2014 he was suspended from the bench for remarks he made subsequent to a case in the family court. Apparently his opinion that he could not support the adoption of a child by a same sex couple became known to the Advisory Committee which oversees disciplinary matters. His point of view that such an arrangement would not be in the best interests of the child was considered contrary to his oath of office; â€œI, _________ , do swear by Almighty God that I will well and truly serve our Sovereign Lady Queen Elizabeth the Second in the office of ________ , and I will do right to all manner of people after the laws and usages of this realm, without fear or favour, affection or ill will.â€  There is also provision for an affirmation for those who prefer to leave out reference to a supreme being. The official notice of his suspension is available here. Presumably Mr Page satisfied the powers that be that after further training he was competent to resume his place on the bench. That is until earlier this week when he was sacked by the  THE JUDICIAL CONDUCT INVESTIGATIONS OFFICE.  The wording of the report is ambivalent.  "Mr Pageâ€™s comments on national television would have caused a reasonable person to conclude he was biased and prejudiced against single sex adopters." Was the underlying position of opposition to same sex adoption the prime cause of his dismissal or its being broadcast on ITV?


This case raises matters of importance as to what we are as a society.  Unlike the French almost every form with a sociological basis however flimsy that we are asked or told to complete has a question on ethnic origin but belief system or  religion unless of direct relevance is not demanded. The matter of the Belfast bakers and the symbolism on a cake has raised fundamental questions which are still unanswered owing to the adjournment of an appeal.  The Roman Catholic population of this country has been invigorated by the immigration of close to one million Poles the majority of whom practise their religion with greater devotion than their British neighbours.  Three million Muslim citizens are settled here and a large number, variable according to source, subscribes to opinions on society that would be incompatible to their non Muslim fellow citizens. It is not unreasonable IMHO  to consider that of the 956 (4.42%) of magistrates listed as "Asian" as at 31st March 2014  hundreds are Muslim and that extreme if not extremist opinions could be considered as being part of their philosophy of life.  I have yet to read of a non Christian removed from the magistracy on the basis that his/her religious belief was incompatible with the judicial function although there has been apparent discrimination against Christians within the medical world where perceived criticism of Muslims has been suspected. The already heady mix of English law and Sharia has been thrown into further confusion by the appointment in Bristol of crown court judge  Shamim Qureshi to sit on Sharia cases.

There are so many overlapping, complementary and contradictory  aspects to the apparently simple case of Richard Page that it is my belief that we ain`t heard the half of it yet.