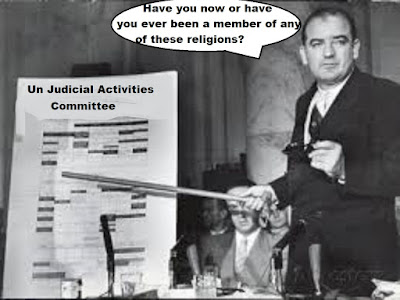 I recently posted on the sacking of former magistrate Richard Page. It seems that for Mr Page trials and tribulations for his Christian view of homosexuality have not ended; indeed it could be said that they have been resurrected. He has now been suspended from his role as a non-executive director at a hospital trust for the very same reasons he was thrown out of the magistracy.  My general opinion is that until perhaps twenty years ago the hold of Christianity, indeed religion per se, within all levels of the way this country runs its institutions of all kinds had minimal effect upon the population in general.  That was before the increasing number of people self described as Pentecostals, the immigration of one million Polish immigrants many of whom are practising Catholics and three million Muslims  of whom arguably half would welcome the introduction of sharia to this country. It appears, however, that actions against Christians for their beliefs rightly or wrongly are disproportionate with regard to attitudes of authority in all its forms when it comes to Muslim positions when similar situations arise.  I have commented previously on opinions of Muslims in the magistracy.  If such individuals are "representatives" of their communities as we are forever being told it seems more than likely that hundreds of Muslim J.P.s hold opinions as "extreme" as Richard Page. Do Appointments Committees up and down the country who vet applicants on their views ever inquire of their attitudes  on homosexuality, sharia law, mixed marriage etc etc etc? or do they rely upon the generalisation that all people should be treated equally?   Should magistrates with so called extreme views be appointed as being representative of a growing segment of our multi cultural society? Is there a point where religious devotion is a factor which should prevent appointment as a magistrate?

I fear that problems of religion are going to be an ever increasing disturbance to our secular way of life.  For somebody whose teenage years were in the swinging sixties this is very depressing.  The shackles thought destroyed in that decade seem to be re-appearing from the very sources it was considered had been consigned to the periphery except now we are too feeble to recognise them for what they are.