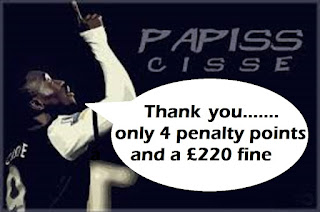 Premiership footballers who appear in court on whatever level of offending must expect the procedings and outcomes to be of public interest.  It might be the case that such intrusion would be much diminshed  if,  as fifty years ago, they were being paid around the average workman`s wage, but when their average  wage is Â£44,000 weekly media interest is par for the course. Driving offences attract intrusion like no others because the majority of us are drivers and we can relate outcomes to our own incomes. Unlike in Switzerland where exceedingly wealthy individuals flouting traffic regulations eg speeding, can have enormous fines imposed this country has a laudable principle of fines according to means. Driving not in accordance with a license is a Level 3 offence [Â£1,000 maximum] with 3-6 penalty points imposed with a fine of half a week`s wages.

Papiss Cisse who plays for Newcastle United  was recently in court where he pleaded  guilty to [I presume] driving not in accordance with a license aggravated by other offences. He was fined Â£220 and with other fines and costs  left the court Â£547 poorer not forgetting 4 penalty points.  Perhaps somebody can explain why the bench did not fine him Â£666 for the offence and increase the number of points handed out.

My time on the bench never involved me in any matter dealing with a multi millionaire sporting personality but had I been I would have sought to make a case for the highest financial penalty to have been imposed within the law and within a structured argument for that decision. For that bench to apparently not to have done so is a matter of regret.  For the many thousands in the local area it will have brought the magistracy into disrepute.  It demonstrates that equality before the law is limited by the appearance of some being more equal than others.