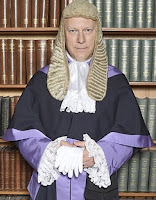 Magistrates decisions to vary curfews for events such as impending holidays booked or special family functions often incur public criticism for their benevolence.  At the crown court where there are fewer curfews imposed judges perhaps don`t realise the implications of such decisions.  My experience sitting on appeals at crown court reinforces that impression. However HH Judge Peter Blair QC at Swindon Crown Court decided that an offender`s attendance at Glastonbury justified lifting of a curfew for that purpose.

HH decided that his offence was serious enough to demand a twelve month custody order.  He found, as so often is the case,  that that could be suspended. Surely that was sufficient leniency in such a matter?  One doesn`t need to be a hang and flog `em red faced overweight right wing Tory or  Peter Saunders of abuse victims' charity NAPAC  to find lifting a curfew in such a situation a perverse decision .  One could even be a socially aware blogger.

GLASTONBURY: Neil Winn charged with murder to appear in court tomorrow Posted on 01st March 2015
Neil win charged with the murder of Lisa Win Posted on 02nd March 2015
â€œI would have gone anyway whether the curfew was changed or notâ€ Posted on 22nd December 2011
Unusual Posted on 08th October 2013
Firefighter wins legal case against Cambridgeshire fire service after judge rules their behaviour â€˜irrational and perverseâ€™ Posted on 07th August 2015
CURFEWS AND PMQs Posted on 27th November 2015
â€œThe place to avoid in Cap-Ferret: Il Giardinoâ€ â€“ French blogger fined over reviewâ€™s Google search placing Posted on 17th July 2014
CURFEWS AND CHANGING THEIR TERMS. IT IS A DECISION FOR THE COURT; NOT THE POLICE Posted on 11th October 2013
No, This is a Judge Posted on 26th February 2013
THE JUDGE WHO PRAISED A CHILD KILLER Posted on 22nd June 2016

JPs SOON ABLE TO RETIRE AT 75
18 IS TOO YOUNG TO BE A MAGISTRATE
JUDGE ONLY TRIALS??
MAGISTRATES` ETHNICITY
EXCEPTIONAL HARDSHIP AND APPROPRIATE RESULT