MET POLICE NOT FIT FOR PURPOSE 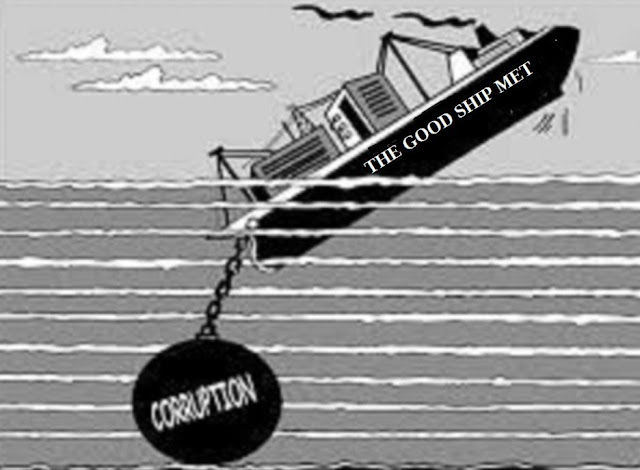 lack of integrity or honesty; use of a position of trust for dishonest gain
illegal, bad, or dishonest behaviour especially by people in positions of power
destroying someone's (or some group's) honesty or loyalty; undermining moral integrity
Corruption is an improbity or decay in the decision-making process in which a decision-maker consents to deviate or demands deviation from the criterion which should rule his or her decision-making, in exchange for a reward or for the promise or expectation of a reward, while these motives influencing his or her decision-making cannot be part of the justification of the decision.

The above are just a few definitions of the word CORRUPTION.  It is to be noted that powerful people  figure in defining the word and that the acceptance of money is not necessarily part of the definition but changing some something is a factor.  I have posted not infrequently on how in apparently ever increasing numbers senior police officers of various constabularies have been caught out for corrupt practices.  This of course might be because society is more open and investigative journalism is more thorough and conclusive than in past decades.  On the other hand there might indeed, as I believe, be an increasing amount of this infection in the bodies of senior police officers and the institutions they control.  Scotland Yard seems to have more than its fair share of rottenness at its head.  Obfuscation and sheer lies are every bit as corrupting in police as is fabrication of evidence or the taking of bribes. The Birmingham 6, Hillsborough, Stephen Lawrence and countless other scandals both investigated, under investigation or to be investigated hit the headlines in a remorseless parade of shame.  Today is no exception. The castigating conclusion of a Met Chief Inspector of unimpeachable reputation`s claim against his employer was that a Metropolitan Assistant Commissioner "sought to disguise her involvement" and gave misleading evidence.  In addition A Deputy Assistant Commissioner was found to have given evidence that was "not credible".  The devastating conclusions by the tribunal continued with stating that another Deputy Assistant Commissioner gave evidence that "was so vague that we were unable to have any confidence as to his actual reason".
That officers in the Met in such senior positions have had their evidence under oath so thoroughly discredited should lead to questions as to their suitability to remain in post.  Indeed IMHO the Met is now an institution no longer fit for purpose....to use a well known description by a previous Home Secretary.
When the result of the referendum has passed into history there should be action for a thorough investigation into the Met and if necessary the whole senior management structure should be up for reform.  Only when the senior ranks above inspector have been cleansed will the organisation be able to have the confidence of its rank and file and of more importance the public it is supposed to serve.