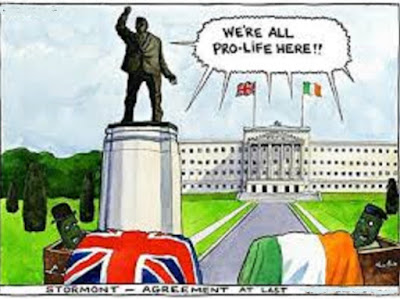 In April I posted on the law on abortion as it affects Northern Ireland.  It truly can be said that in many respects Ulster is a law unto itself.  The political and social history of the province in the last hundred years is far removed from any similarity to the rest of the U.K.

An attempt has begun today in the High Court in Belfast to reverse a ruling that abortion law in Northern Ireland is "incompatible" with human rights law. It seems that there is going to be an almighty clash between die hard reactionaries who would do the late Dr Ian Paisley proud and those who would drag this aspect of Northern Ireland legislation kicking and screaming into the 21st century.

It is paradoxical that pregnant women with their different heritages seeking abortion from either side of the border   must travel to another country, usually the U.K., for the procedure to be carried out.