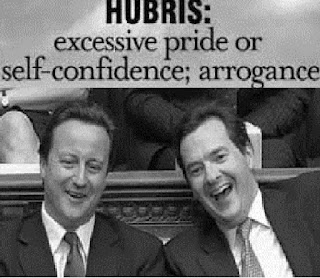 HUBRIS!    The statements from David Cameron, Boris Johnson and Michael Gove were worthy of their positions and deserve respect from all of us.  But the second tier politicians, bankers, business people and various observers whose opinions have been rejected serve as a lesson for all time.  By the UK allowing the steam cooker of right wing nationalism to escape in an orderly fashion,  notwithstanding short term fluctuations financial and political, we have avoided what is emerging in Germany, France, Spain and Italy; namely xenophobic nationalists and left wing trade unionists facing off against each other on the streets. EU leaders were offered the opportunity by David Cameron to show how much they could assist him in his negotiation; they offered him crumbs from the European table  and thought that he could make enough bread with the addition  of  fear and bluster. Now Merkel and Hollande are expressing their dismay at British voters` decision.  They have only themselves to blame.

British or perhaps English pragmatism is a triumph for common sense.

A DARK ROAD AHEAD
COVID-19 LOCKDOWN; MAGISTRATES` HEALTH OR DUTIES?
CORONA VIRUS`S LUCKY 4%
TO JP OR NOT JP: THAT IS THE QUESTION
DESCENT INTO AUTHORITARIANISM: AN EARLY WARNING