CAN Â£11 MILLION DAMAGES AGAINST NHS EVER BE JUSTIFIED? 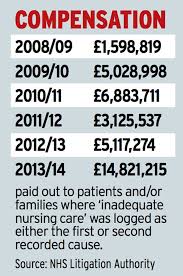 Andrea Leadsom in her remarks today promised to curb the ridiculously high salaries and bonuses that senior company executives pay themselves especially with regard to the average wages of a firm`s employees.  Aside from anything else one doesn`t have to be even a middle of the road leftist to realise that unbridled capitalism is as much a curse on a cohesive society as one with central planning. But it seems that in other spheres, namely in our law courts, the issue of damages, alimony and divorce settlements is equally out of hand.

To be injured or have reduced life expectancy or the life of a vegetable owing to others` incompetence or malevelance must be a tragedy of enormous proportions for all the family involved. When a public body and/or its employees supposedly with quango oversight is responsible it is only right that recompense be made for the trauma suffered and its consequences even if that entails lifelong support.  But does that justify a capital sum of Â£366,666 annually for life in addition to annual income of Â£110,000 from the original overall capital sum awarded in a damages claim?  This child`s life has been ruined by medical incompetence and now the tax payer is short of Â£11,000,000.  Try as I might I can only conclude that that figure is not only astonishing but unreasonable.