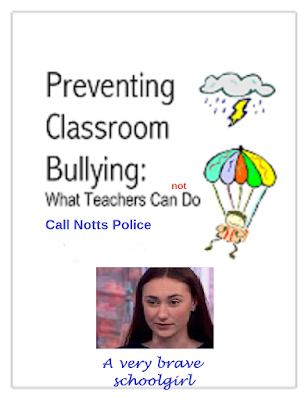 On July 14th I posted on Nottingham Constabulary`s zealous new approach to "hate" crime.  After all what better way is there for a police force to demonstrate its intentions and abilities to protect the citizens of "Robin Hood Country"  than grabbing hold and clinging on to the current policing bandwagon and making jingoistic sounds of catching outlaws emanate loud and clear from its press department?   Now, after one headline,  all the world can see the true ineptness, incompetence and simple bullying that lie just beneath the smooth exterior of its temporary chief constable who, in the coming days or weeks, will no doubt endeavour to justify her position whilst her boss who left last month gets a sun tan in Cyprus whilst policing that notoriously crime ridden area known as the British Sovereign Base Area, Akrotiri and Dhekelia.

A 16 year old pupil living within the compass of Notts Police was wrongly accused of bullying, dragged from her classroom and imprisoned in cells at Mansfield police station and refused contact with her parents who travelled to that venue to see their daughter.  I won`t re-state the events as the episode is reported here in sufficient detail for any dispassionate observer to conclude that the behaviour of said police force was nothing short of disgraceful and a flagrant abuse of power.

This courageous girl has waived her right to anonymity so that her case can be be discussed in the public domain. The question is how many other cases of arrogant and possible unlawful police behaviour in Nottingham and elsewhere remain secret?

ARE MAGISTRATES BEING SELECTED BY ETHNIC QUOTA?
ANARCHY FOR THE 21st CENTURY
SCANDAL OF SINGLE JUSTICE PROCEDURE IS A BLOT ON THE LEGAL LANDSCAPE
A NIGHT WATCHMAN?
FOR EVERY PLAN THERE`S SOMETHING TO GO WRONG