THE UNACCEPTABLE WORDS OF A DISTRICT JUDGE 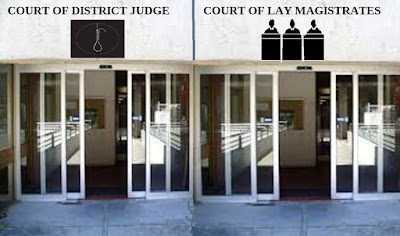 All members of the judiciary must follow strict protocols in their words and behaviour inside and outside the courtroom. These protocols apply equally to members of the Supreme Court as they do to every Justice of the Peace. With judges in particular the bible they must observe and the advice and/or instructions to which they must adhere is the Guide to Judicial Conduct. From s.8 of that document the following is of interest:- "A judge should refrain from answering public criticism of a judgment or decision, whether from the bench or otherwise. Judges should not air disagreements over judicial decisions in the press".

Last week at Kirklees Magistrates Court a lay bench of J.P.s disposed of a charge of racially aggravated threatening behaviour............a very woolly offence which in some circumstances can be conjoured up over a very minor and spontaneous atypical verbal outburst........by the imposition of a 12 months conditional discharge. From the report which has only the barest of details it appears it was another example of a police officer milking a situation for all it was worth.  Nevertheless West Yorkshire branch of the Police Federation made a big splash about what they described as, "an utter joke of a sentence".  As the police trade union there was nothing exceptional about its opinion being put into the public domain.  What followed was indeed exceptional.  The same offender, earlier this week on August 3rd, appeared before District Judge Michael Fanning at Huddersfield Court on charges of breaching court orders.  During that hearing the judge commented, "He got a conditional discharge and I canâ€™t see how when you commit a racially-aggravated offence in these circumstances for which you were convicted in your absence. It seems to me that it was dealt with very lightly".

It is my strong opinion that by criticising disparagingly  in front of the offender in a public courtroom the sentence previously handed out to him by the lay bench  this judge has brought the law into disrepute.  I hope the chairman of the bench in West Yorkshire has the cajones to complain to the Senior Presiding Judge on behalf of all his/her colleagues.