IN THE NAME OF EQUALITY AND DIVERSITY 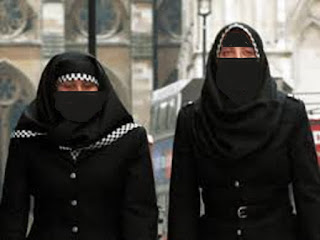 There is no other way of saying this: sometimes I think this country and some of its authorities and power sources have gone arse over tit in their quest for so called "equality".  Perhaps it is the Left`s inability to get over Britain`s activity in the slave trade notwithstanding that Britain was also the first country to abolish that sordid activity which is still operational in parts of the globe. Perhaps the less than benign practices employed for the centuries when Britain ruled an empire still feature on the conscience of those who revile the western concept of democracy built upon Judeo Christian foundations.   Perhaps there are those who began reading Animal Farm but put it down before the story ended and still fail to see where the animals were led by so called "equality".  Whatever the motivation I was astonished to read of a so called Chief Constable who has advocated the possibility in the name of diversity of allowing his female Muslim officers to wear the burka.   This is "equal rights" gone stark staring mad.  Apart from the underlying philosophy of those who choose  to demonstrate their beliefs in such apparel, such beliefs not necessarily compatible with the law of the land they are employed to apply, in practical terms it would be ridiculous.

I find it disturbing that such thinking processes led to this police chief`s absurd posturing.