DAVID CAMERON:THE BEST OF TIMES AND THE WORST OF TIMES 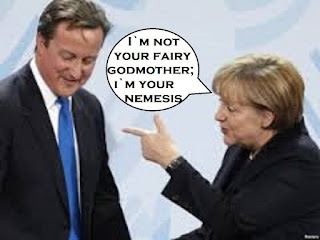 I wonder what Dickens would have made of this fiasco.  A prime minister within a coalition offers in his party`s election manifesto a referendum on an issue which has divided this self same  party for over a generation.  Against all the odds and to his own utter amazement he wins that election and is faced with putting his commitment to the people. Surely his best of times.  So he goes to Angela Merkel with hardly enough of an argument or plea to cause a blip in her intransigence   hoping against hope that she would offer the bare minimum of a piece of paper with her signature on it to cover his arse. Locked into what is a dream for some of his party  that is becoming his nightmare he and his cohorts  fail to frighten the electorate into submitting to his will. He wakes on June 24th assuring us he will remain as prime minister only to resign a short time later whereupon the final ignominy of this incompetent unprepared inept prime minister arrives; his worst of times, and he resigns his seat.

Chickens are returning in droves to roost. It would appear that the crass incompetent advisors and parliamentarians who steered the referendum bill through parliament and who voted six to one for it did not even realise exactly what they were voting for. As a Brexiteer all my adult life I am dismayed that those same incompetents are now calling foul when faced with the inevitable consequences of their own fallibility. Castigating the High Court judges who have pronounced on the legal position is a disgraceful reaction to their own failings. There cannot be true democracy without a balance of law and representative government. If the Supreme Court upholds the decision it will demonstrate that this country with its unwritten constitution cannot have referendums on policy. Such a device has now been demonstrated as totally incompatible with a parliament which makes law.