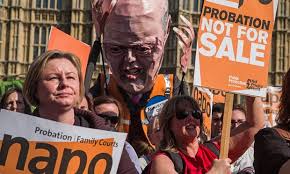 Today it is reported that the Lord Chief Justice favours tougher community sentences instead of jail.  This aspiration would seem to be based upon the probation services in their current assorted framework being able to provide the supervision and organisation required.  In the opinion of many closely involved that aspiration will remain just that; an aspiration. The transformation of a national probation service during the previous government into a patchwork system of outsourcing does not provide this blogger with any optimism in that regard notwithstanding the possibility of magistrates` courts sentencing powers being increased to twelve months custody.

SENIOR JUDGES` PUBLIC COMMENTS Posted on 01st December 2016
400 criminals a week reoffend during community punishment Posted on 21st August 2012
4,500 serial offenders are let off with caution despite committing at least 15 crimes eachâ€¦ Posted on 24th February 2012
JOKE JUSTICE! 8000 criminals given community service ELEVEN times before being jailed Posted on 23rd February 2013
No Prison, No Punishment, No Payback, No Pointâ€¦ Posted on 25th July 2011
UNDULY LENIENT SENTENCES Posted on 16th June 2015
Magistrates should use online crime maps ahead of sentencing Posted on 05th May 2012
UK riots: police unhappy at light sentences for looters Posted on 11th August 2011
Thousands Of Serial Criminals Dodging Jail Posted on 13th May 2014
AN IGNORANT BARONESS Posted on 05th July 2018