LEGAL DECISIONS FROM ON HIGH 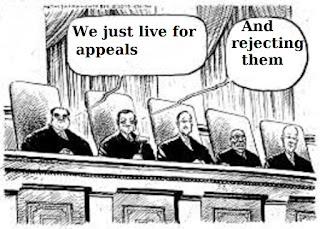 This blog in its seven plus years of existence has attempted to bring to those interested in the goings on in a magistrates` court, matters directly related and sometimes offering a wider viewpoint including political and police involvement.   Since my retirement my comments obviously have relied upon items generally available in the public media with occasional tit bits from former colleagues and my own recollections of interesting cases. Observations on cases from the Appeal or Supreme  Court have generally been of little connection to my original motivation for inclusion here and consequently there have been few such related posts.  Today is an exception.

Many thousands of us, myself included, have appealed against a parking fine of one sort or another.  Fortunately I had the wherewithal and time a couple of years ago to make a successful appeal but the enforced procedures employed by the council might have forced many to abandon the fight.  It was therefore gratifying to read of a motor cyclist whose appeal reached the Court of Appeal and culminated in his winning his case against Camden Council which governs an area with a similar population to Reading.  Whilst this inner London borough with others has a major traffic and parking control responsibility  it does seem that some brake on its typical requirement to obliterate all opposition to its authority.........a feature common to many such organisations not necessarily governmental.........might have saved its tax payers many thousands of pounds in legal costs.

Internal inquiries into police misconduct often find officers guilty of misconduct but not gross misconduct and since it is a finding of the latter which probably justifies dismissal the offender lives to offend another day. The recent "bare breast" case of Greater Manchester Police Assistant Chief Constable  is one to savour on this point. Of course the moot point is when does misconduct become gross. Now to some degree there is an answer from the Court of Appeal.

And finally............from a Supreme Court judgement of  the need to protect the individual from arbitrary detention.  In 2015 peaceful  demonstrators against the state visit of the Chinese President were arrested for waving flags. Today it has been announced from Downing Street that President Trump will indeed be granted a state visit to this country later this year.  One doesn`t need to be a Nostradamus to predict that there will be widespread demonstrations against him not excluding during his drive down The Mall.  We should all be concerned by the judgement from the Supreme Court published today.