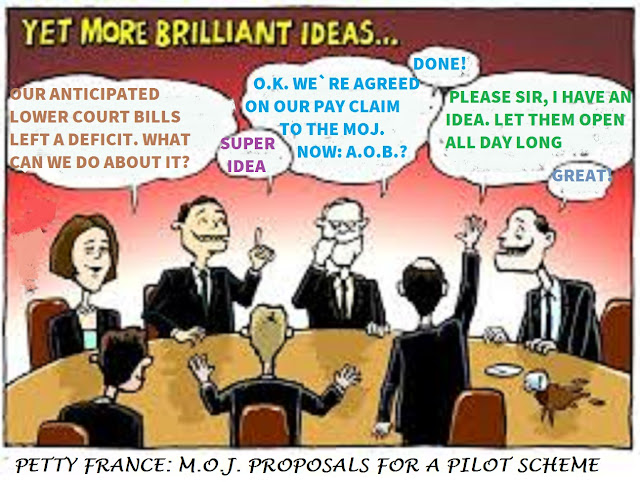 For many decades court sittings have begun at 10.00am.  In actual practice that means that the professional and active participants usually arrive at least one hour earlier to prepare for the anticipated workload.  Generally that start time is in line with British business.  We don`t exist in a Mediterranean or middle eastern climate where much business, government and retail activity begins at 8.00am or earlier. A 9.00am start to a working day allows parents to ensure children are safely at nursery or school. For most if not all workers a common work start time is as significant as a common time per se. Those voluntarily contracted to some night shift work be it eg manual labour or medical emergency arrange their domestic duties accordingly. As has been mooted previously some bright young things at the MOJ think that court sittings could begin at 8.00am and have scheduled Highbury Corner Magistrates Court in London as the place to run a pilot scheme.  Where have we heard all this previously?  The MOJ loves its pilots.  Very few do anything but cause irritation and resentment amongst those involved or are just the leading edge of a pre-determined consultation; another favourite watchword of the weasels of Petty France London SW1.

At Highbury Corner it seems that lawyers are venting their splenetic energies at this ridiculous notion. The proponents have offered an alternative arrangement of continuing the current practice of a 10.00am start  but running courts until 8.30pm; an alternative road to revolution by many of the legal fraternity. Everyone involved with the magistrates` courts system knows that it is almost a certainty that active sittings rarely begin on time.  Many defendants don`t know or care which day of the week they are due to appear never mind the time of day. To imagine that the miscreants of North London will arrive at a court at 8.00am is to believe that there are fairies at the bottom of the court`s car park.  And what of the court staff including those sometimes considered by HMCTS as unpaid employees; the Justices of the Peace without whom the system would collapse?  Paid employees including District Judges might be offered  some sort of inducement financial or time off in lieu to upend their whole work/home balance but J.P.s?  There would be resignations en masse.  But they are so afraid of retribution that not one dares to voice a public objection.  Perhaps in its unsaid quest to professionalise the magistrates` courts system the MOJ would welcome a further erosion of J.P.s` involvement at the court level to one of a neutered group dealing with TV license evasion or similar minor transgressions.

This proposal is just one more step in wrapping funding cuts around a seemingly plausible route to efficiency.  The civil court has in the guise of "meeting its costs" put itself beyond the reach of many who cannot afford the required fees to obtain justice. Civil, family and criminal courts are not experiencing all the savings expected by the wholesale restriction of legal aid because litigants in person and defendants require much more time to present their cases and we all know as those Whitehall weasels think they know; time is money.