SHOULD THE CATEGORY "HATE CRIME" BE ABOLISHED? 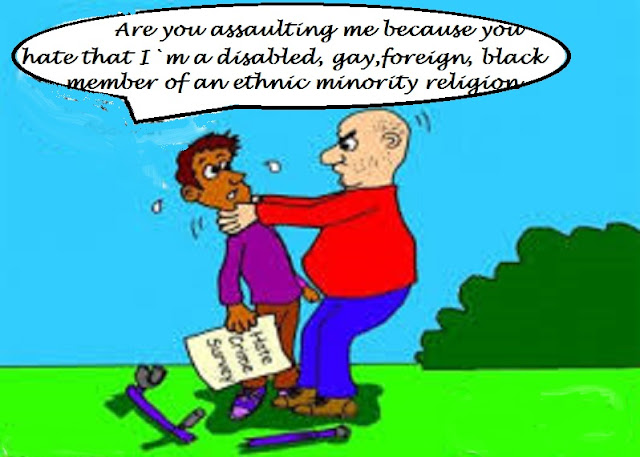 For England Wales and Scotland the Crime and Disorder Act 1998 made hateful behaviour towards a victim based on the victimâ€™s membership (or presumed membership) in a racial group or a religious group an aggravation in sentencing for specified crimes. Does it really justify increasing a proposed custodial sentence if the perpetrator made clear that his assault was motivated because the victim was a so called goth, or gay, or Muslim or Jew, or Hindu or whatever minority category the court recognised.  Does the hate within the perverted personality of a viscous thug need to be eg of a non acquisitive nature?  The examples are not infinite but I`m sure many can come readily to mind.  The result of such criminal action up to and including murder is not altered by the offender`s reason assuming there is no defence of diminished responsibility. Some jurisdictions do not recognise hate crimes; Albania, Cyprus, Estonia, San Marino, Slovenia and Turkey.

The great and the good of this country`s legal establishment consider hate to be an aggravating factor.  The simple reason I can think of is that by so doing they consider a certain but unknown amount of protection for the minorities and/or deterrence to the assailants is offered.  But then why have a differential at all.  If the sentence per crime were increased so that all were at the same level would that not be more logical?  I doubt that those intending violence  consider that shouting fucking Jew, Muslim, Queer or what have you will increase their sentence if convicted.  They are so self centred and/or encompassed by their perverted passions  that the thought of being in court just does not occur to their little minds. For the legal process the term "hate crime" can be in itself a source of some controversy.  It is time to consider its abolition as an aggravating factor?