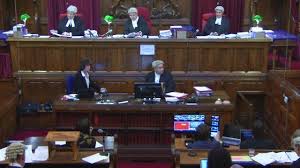 Lesson one for new magistrates:- do not talk to the media.  It`s that simple. Of course there are so called rules which define the limits of expressing opinions to same but those who`ve been around for a while understand that unless you were in Kingston or Barry or similar situations and your court was being closed and you vented a portion of your spleen to the local journal the chances were that you would be brought before the headmaster and duly chastised.  So often it is the retired J.P. who makes known his/her opinion on a legal topic in the press, TV or social media. Thus it is that the former Chairman of the Bench in Bradford has castigated the Appeal Court for second guessing an original sentence passed by  HHJ Roger Thomas QC the Honorary Recorder of Bradford.The offender`s sentence was reduced from 6 months to 4 months custody.

Ms Carroll is a wise and experienced individual.  There are many more of her ilk active and retired.  More of them should speak up when the situation demands.  Justices of the Peace are told that they are full members of the judiciary (junior branch). But they are a race apart.  They are volunteers with incomes derived outwith the MOJ.  They are often experienced professionals or tradespeople in their own right. Yet they are treated as little better than school children by the authorities in their ivory tower in Petty France controlled by an increasingly reactionary Ministry of Justice which appears at times more interested in its press releases than common sense in trying to remember when the British justice system was held in such high regard world wide.  Would that were the case now notwithstanding the opportunities afforded by Brexit.