ARE IDENTITY CARDS DEAD AND BURIED? 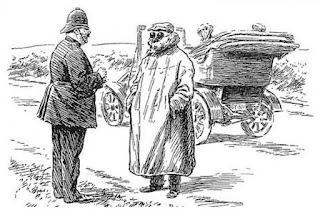 Almost seven years ago after Labour was thrown out of government the decision to impose identity cards for all was rescinded by Mrs T. May the new Home Secretary. Libertarians and perhaps many others not so single minded about retaining their privacy in an increasingly big brother state were extremely pleased at that announcement. Identity Cards for all, a policy so fervently espoused by successive Labour Home Secretaries, are now history or so we hope but the problem of privacy for the citizen didn`t begin in this century.

In late December 2008 I was sitting on a case where a driver had refused to give his details when required by a police officer. For a reason now forgotten during this hearing we had some "downtime" and were in the retiring room where on impulse I looked at the bound annual copies of "The Justice of the Peace" on the bookshelf. I chose to look at the edition of 1908 and found the page for the same December date of that year. And there it was in black and white Edwardian prose; the case law where a driver on the request of a police constable was required to give his name and address. Licenses to drive were for the future. A gentleman had been motoring through Hyde Park and for whatever reason refused to give his details to the constable when asked. The case duly reached a higher level where it was decided that a constable had the right to demand a driver`s name and address.

In the seven years since Labour`s loss of power our security situation has changed.  It would be foolish to think that there will be no repeat of the Westminster terrorist murders in future.  In some quarters there are whispers of resurrecting the issue of identity cards for all.   Of course we won`t hear anything of this in the next seven weeks but later..........?