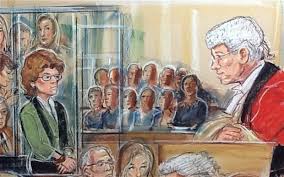 The anomaly of either way offences has once more reached the higher echelons of our justice system. This time the intervention is by "Lady Justice Hallett, who sits on the Court of Appeal,(and who said) that a full jury trial could cost Â£20,000 for defendants accused of offences such as stealing sweets from a supermarket. She said the Government should ""remove the right to elect trial by jury in cases that simply do not warrant it"". Since the publication of two of my posts from 2009 and 2013 copied below, theft of items with a value of Â£200 can be tried summarily only.  However the right to elect jury trial for either way offences remains.  It would appear that it is to this anomaly  that the Hon. Lady is referring.  As far as I know there is no similar availability in any other jurisdiction. She even refers to a case on which I commented below in 2009. At this proposal no doubt most of the legal profession will be up in arms and will take to the barricades crying justice or death.  This display of support for the common man, however, is barely skin deep. The secretary of the Criminal Bar Association  in commenting on a case he was defending says in the article, "The time taken over a summary trial can be a lot quicker - and things came out over that longer process which utterly exonerated them." What a fatuous self serving argument.

Barristers from the highest and most respected QCs to the newest pupils in their rush to denounce such proposals conveniently forget the situation in the numbers of ever increasing trials that take place in magistrates` courts before a District Judge(MC) sitting alone. Their memory lapse  includes the underlying fairness in these lower courts of three Justices of the Peace sitting as a tribunal where a majority verdict is required for conviction; a jury of peers albeit limited in number but more highly qualified than any jury supposedly randomly selected where "randomly" can include those with English as a very poorly understood 2nd or even 3rd language, where reasoning ability is not tested, where prejudice can exist and who do not even need to be citizens of this country.

Lady Justice Hallet would not dare to entertain this point of view.  She is likely to be amongst those who in their heart and soul might pay lip service to the magistracy but would not object to its being relegated to a peripheral role allowing a professional cadre of full time government paid District Judges to preside and adjudicate unhindered by supposedly unqualified J.P.s.  But as usual there is obfuscation.

Most people could not give a damn whether or not the lay magistracy is eased out and an effective system of summary justice founded nearly 700 years ago and developed to cope with the requirements of a 21st century democracy survives.  Senior judiciary are not "most people". The least they should do is make their opinions known before they retire to their country cottages on their civil service pensions safe in the knowledge that government can`t chastise them.

Is it time to say goodbye to either way offences?
by TheJusticeofthePeace @ 21. Nov. 2009. â€“ 14:18:34
Long before the recent financial debacle which the citizenry of this country will be paying for twenty years from now the government was looking for cost savings wherever it could primarily as a political stick to beat the Tories in a Dutch auction to demonstrate that "P?rudence" was the watchword. Of late this belt tightening has more in common with a financial famine where the survival of this country in the political premier league is uncertain.
The Ministry of Justice is certainly more than a bit player in this race to the bottom. Unlike the NHS where most of us have personal experience HMCS impinges upon a minority and a minority by its very being that has little influence the professionals running it the exception. It is only in England Wales.....the Scots and the Irish have more sense.......that within a certain category of offences the alleged offender can choose to be tried at the Magistrates` Court or the Crown Court. At the former the bench comprises three highly trained personnel generally representative of the community they serve who give their time for no payment except minimal expenses. The maximum sentence that bench can impose is six months` imprisonment which can be appealed before a judge in the Crown Court where a life term can be the disposal. Thus generally although over 90% of cases are completed at Magistrates` Courts and the most serious at the Crown Court there is an intermediate level of offences; either way offences, in which the defendant can elect to be tried at either venue. At Crown Court the trial will be in front of a jury of twelve.
Recently the Crown prosecution Service has launched a consultation paper on proposed changes in policy with regard to the initiation of a prosecution amongst which is the following,"The changes extend this test to include a requirement asking them to consider whether a prosecution is proportionate (balancing time and cost of prosecution with the seriousness of the offence)". What this means in simple terms is whether prosecuting a case is worth the cost the inference being in my opinion that the costs of a trial are not worth the low level of offending. A recent case demonstrates this. A man was taken to court for stealing a banana worth 25p. It was an either way offence of Theft from a shop. He elected trial by jury at the Crown Court where it took a jury about ten minutes to acquit him. Latest figures show 59,000 people were sentenced at Crown Court for either way offences. Depending on one`s viewpoint many of these offences could be considered as suitable for one court or the other with perhaps the majority at Magistrates` Court especially if the maximum sentence available there were increased to twelve or even twenty four months imprisonment.
Recent statistics on the costs to government of trials at Magistrates` Courts and Crown Court trials are hard to come by but within the last ten years or so it has been guesstimated that the latter costs ten times the costs of the former. So by eliminating either way offences we eliminate an enormous expense and in doing so remove an anomaly that has had its day {in court?}
by The Justice of the Peace @ 14. Jan. 2013. â€“ 21:358
The second post that I wrote on this site 21/11/2009 was entitled â€œIs it time to say goodbye to either way offences?â€ The powers that be obviously think not. Probably the most commonly committed of such offences is that of theft. As far as I am aware there are no figures to show how many charges of theft are heard before a judge and jury at crown court and what percentage of the total these represent. An argument often heard from lawyers why the status quo should remain ie theft should not be summary only, is eg for those of good character a conviction of theft however minor could have a devastating effect on their career and/or reputation. IMHO this is a spurious and unmerited argument. The underlying imputation is that a jury is more likely than a bench of J.P.s or a SINGLE DISTRICT JUDGE to acquit their client. Whether said client committed the crime or not is of course not a matter for consideration. If juries are seen to acquit in demonstrably doubtful situations and in contrast to the evidence presented, then one of two changes will eventually take place; a change in the particular law in question or pressure from government to satisfy a restless populous by demanding more judge only trials at crown court and dispensing with the jury altogether.
Criminal damage is an offence tried summarily only if the sum involved does not exceed Â£5,000. Above that figure or if the charge is racially or religiously aggravated the offence becomes either way. What logic prevents a similar cut off level for theft as a summary only offence? What form of trial would the 40 thieves have preferred?