ONE LAW FOR HIS HONOUR AND ANOTHER FOR J.P.s 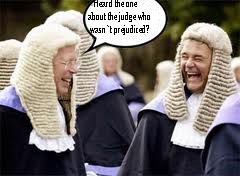 With many others I have long been aware that when it suits the MOJ J.P.s are certainly considered an important part of the judiciary and must be treated as such.  When it comes to a perceived breaking or bending of the myriad rules imposed on that same judiciary J.P.s are certainly considered a species apart.  Records of disciplinary action taken against J.P.s reveal a distinct tightening of supposed judicial boundaries when compared to judges. In the last few days three highly publicised incidents where offenders and sentencers; one lay bench and two crown court judges,  were involved in cross court comment illustrate my opinion that there is one law for them (judges) and another for us (magistrates).

Before Norfolk magistrates a foul mouthed female offender left the court unhindered by anything as direct as a charge of contempt and a cooling off period behind bars as should have been applied by a bench which had more tolerance than good sense and none for public perceptions.  In contrast a crown court judge in sentencing a female who had misused a company credit card to the tune of Â£38,000 gave her eighteen months custody suspended for two years made the following comment, "I hate sending women to prison."  Irrespective of the rights or wrongs of the sentence HH`s words demean the status of acting "without fear or prejudice".  Substitute Gays or Lesbians or Jews or Muslims or Plymouth Brethren or what have you for "women" and the problem created is unmistakable. But make no mistake; if a magistrate had given such a reason there would have been an investigation.  And finally a judge sent into custody an offender who called him "mate".  I doubt whether if HH`s arrogance had been displayed by a magistrate it would have gone unheeded by those in the Judicial Conduct Investigations Office.

As the old adage says; there`s one law for them and another law for us.