A RAY OF HOPE 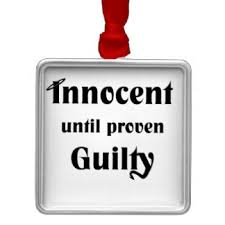 Unsurprisingly my comments here are often critical of one or more parts of the justice system, of how it operates and where its operatives from high court judges to litter wardens have made decisions which are of interest usually because of their ineptness. It is therefore a change to report of a case earlier this week where a habitual criminal charged with robbing a High Court judge , refused to plead or offer any defence and even  refused to enter the courtroom.  Yet he was acquitted.  In other words the prosecution failed to persuade the jury beyond reasonable doubt that the defendant had committed the crime for which he had been charged. This is a ray of hope that the concept of innocent until proved guilty still resonates whatever  odds are stacked against a defendant.