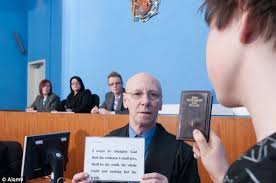 My few conversations with former colleagues about the efficiency of my former court lead me to believe that for all the trumpeting of digital innovation the same old problems still exist and "downtime" is not a historical concept.  But apparently there is a glimmer of light on the horizon; at least for ushers who, we all know, are the rock upon which the court just could not function.  Indeed I well remember a morning sitting in what was a heavily listed remand court, when we were told at 9.55am that there was no usher available.  We refused to sit until one was found for us even if it was an underemployed legal advisor.  At 10.25am fully bedecked in his black robe he appeared.  Problem solved. But to return to my point: a digital device for ushers has been nominated for a prestigious award.  If it truly performs as its designers hope progress will have been made in fact and not just theory towards a fully functioning digital courtroom.