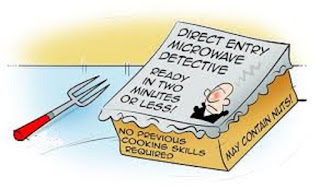 Over the last twenty years or so we have become accustomed to the downgrading of specialised jobs in the name of efficiency ie cost saving.  There used to be two classes of nurses; state registered and state enrolled.  The latter classification of lower qualified personnel was established in the 1940s and existed for half a century before being discontinued.  Since then nursing has become a graduate profession and auxiliary nurses supposedly undertake the basic and menial tasks which their betters have abandoned. These graduate nurses are pressing for increased responsibility for patient care with not all the medical profession in agreement that that is beneficial to patients. Teaching assistants were introduced about fifteen years ago ostensibly to do what it said on the tin; assist qualified teachers in the classroom.  However since then these so called assistants have increased their classroom duties to such an extent that some would assert that they are in fact taking over functions of their qualified seniors.  This downgrading of professionals can be observed in many professions. One would have thought eg that the fitting and supply of contact lenses would be limited to those who were registered optometrists or doctors with a diploma in eyecare.  One would have been wrong. Dispensing opticians who previously were involved mainly in supply of spectacles can be termed "contact lens fitters" without the qualification or expertise to conduct eye examinations. In the magistrates` courts many CPS prosecutors are not lawyers; they are perhaps the equivalent of legal executives ie trained for the task in hand but without the knowledge of the law required for graduate and qualified lawyers.

Police forces throughout the country were quick to capitalise on the availability of lowly educated and low waged assistants commonly known as Police Community Support Officers who have no power of arrest but according to the propaganda provide a uniform on the street.  That that uniform should be of a warranted police officer was overlooked. As is their wont it`s the Met Police pressing ahead of the queue in attempting to cover up the lack of qualified personnel insofar as its shortage of detectives has led it to seek new entrants directly who would not serve the usual "apprenticeship" in fact if not in name through service as a beat constable for two years.  Quite how such an innovation will go down with the rank and file of police officers is not within my compass.  However I doubt it will be with open welcome arms as I doubt such incomers will be able to be considered on a par with those achieving detective positions through traditional methods.