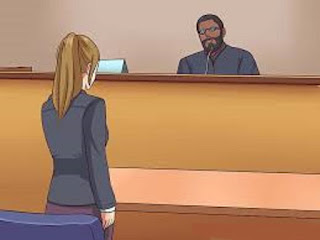 I have long shared my opinion on these pages that in the long term (over two parliaments) a Conservative government and probably a Labour one also would be happy to remove independent Justices of the Peace from the courtroom so that paid civil service employees ie District Judges would preside over magistrates` courts perhaps with J.P.s as wingers and perhaps not.  With magistrate numbers down to about 13,000.......from a peak of more than twice that number just over a decade ago and increasing numbers of lawyers being appointed District Judge the process is well underway. J.P.s with the encouragement of their Association and officialdom seem to have approved of their sitting alone in an office accompanied by a legal advisor to preside over simple summary non imprisonable cases. The official version was published recently and is copied below.

Hello, my name is Mike Logan and I work in HM Courts and Tribunalsâ€™ Development Directorate. I would like to share with you an update on the implementation of the Single Justice Procedure (SJP) which is the means by which work is processed within the Single Justice Service (SJS).


What is Single Justice Service

A key part of the reform of courts work. SJS will contain all services delivered by the magistratesâ€™ court which can be considered by a single magistrate. As well as SJP it will include applications and the digital services which support these including Automated Track Case Management (ATCM); online plea; and the Applications Register.


What is Single Justice Procedure

A legislative change in the Criminal Justice and Courts Act 2015 allowed for a single magistrate to deal with adult summary-only, non-imprisonable offences for â€œguiltyâ€ pleas and â€œproof in absenceâ€ cases. They sit with a legal advisor outside of a court room without the defendant or prosecutor being present, for cases such as speeding, vehicle excise duty and fare evasion. These cases account for about 850,000 of the total cases per annum.
This change links closely with the successful rollout of the online plea service for traffic offences, which is also live across the country. SJP went live in April 2015 at Lavender Hill Magistratesâ€™ Court which was an early adopter and a prototype for the new procedure in London for the Metropolitan Police Service, DVLA and Transport for London cases. In April 2016, a Statutory Instrument was laid to extend the use of SJP to other prosecutors such as TV Licensing, the Environment Agency, train operating companies and local authorities.


Stakeholder and user engagement is vital

Implementation has been managed through a cross-agency Single Justice Procedure Steering Group which I chair. All of the national prosecutors including the police, DVLA and TV Licensing are represented along with HMCTS Regional Leads. The Group has done a huge amount of work with the support of MoJ Digital User Experience colleagues from developing the new SJP Notice which is sent to the defendant, to agreeing a national SJP Protocol outlining the key business processes to be followed by all agencies.
There were a number of challenges to overcome, such as dealing with 43 individual police forces and their different IT systems and requirements. However, by devoting time to build excellent working relationships with colleagues from the police and prosecution agencies at the outset, we ensured implementation has been kept on course.
This steering group is shortly to be replaced by an operational working group which will monitor progress and future developments of SJP and online plea.

The national picture on implementation is really positive. SJP is now live in 57 Magistrates Courts across England and Wales. Between its inception in April 2015 and April 2017 the number of cases dealt with using SJP numbered 667,168 of which 599,921 were disposed of. All 43 police forces are now live. DVLA and TV Licencing (TVL) are now live in all HMCTS Regions. We also have local authorities and train operating companies using the new procedure. SJP has generally been well received by magistrates, prosecutors and court staff. Prosecutors have reported benefits from not having to attend court as often to increased productivity.

ATCM is the new end to end digital service that will process SJP work. ATCM, through the prosecutor portal enables prosecutors to directly upload their SJP cases onto the system. It provides an interface for legal advisors to access and record decisions for SJP cases, notify parties of decisions made and generate orders and notices.
The product has initially been developed as a pilot in conjunction with Transport for London. The first SJP session was held in Lavender Hill Magistratesâ€™ Court on 12 May 2017, with two more following in quick succession.
Discovery work has started with TVL and DVLA to extend ATCM to their cases. Initial discussions are also being had with police in order to start preparations for including traffic cases.


Team working is crucial to success

None of this could be done without the invaluable support of colleagues within my team, HMCTS Regional Business Change Managers and Common Platform Implementation Leads. All involved have done a huge amount of engagement locally with the various prosecution authorities. A number of process mapping events have been held to agree future state arrangements and to work out and agree plans across each HMCTS Region.

I hope you found this blog informative and I would be interested in hearing your views on whether further blogs on SJP would be useful. Please feel free to contact me or the team directly by email or by using the comments function at the bottom on this page.