PILLAR OF JUSTICE HAS NO SUPPORT 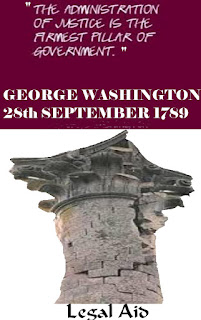 Commentators of late have been suggesting that the great British public has turned a political corner and would welcome tax increases in order to improve funding for public services. With regard to NHS or social care they would appear to be inviting hell and damnation if there were the slightest hint that just perhaps individual contributions from those with the means available might be a better way out of this financial mess. That a right wing DUP orders Tories to retain benefits to pensioners whose financial position is such that they could happily forgo such largesse, a political position that the Left would have occupied a couple of decades ago,  indicates the paradoxical political world we inhabit.  And so it is with the emasculation of everything associated however remotely with out legal and justice system.

It is estimated that addiction is responsible for about 70% of acquisitive and/or violent crime.  Therefore one would have thought that the intelligent answer to that would be to be "tough on crime and tough on the causes of crime" (Tony Blair 1993)  But nay.  Since then we have endured tinkering........no other word seems more appropriate......with the justice system with platitudes and inefficiencies disguised as policy from the MOJ and Home Office. As examples just a few cases this week from magistrates courts illustrate what is really happening below the headlines of murder and terrorism; criminal activity which I would argue affect us all more than those aforesaid headline grabbers.  Please spend a moment or two perusing these four cases of criminal activity driven by addiction. These cases are replicated in every magistrates` court every day of the year.

And what are we offered?  Court closures by the hundred and severe restrictions on the availability of legal aid even for the poorest in society. And yet, as I wrote Wednesday June 28th the CPS Inspector`s report when noting that absentee defendants are "the biggest single reason why first hearings were ineffective" did not even mention court closures as a possible reason.

This is the Alice in Wonderland political world that appears to be the norm.  No wonder younger voters with no memories of the Cuba crisis where MAD policy prevented war, the three day weeks  and work by candlelight in the 1970s voted for a would be demagogue who offered a financial holy grail. MOJ and Home Office policies are a microcosm of all that`s wrong in this country financially, practically, morally and socially. There is nothing other than self serving preservation and limited horizons driving many parliamentarians despite that they protest too much.  They voted in their arrogance to hold a referendum without any caveats on requiring a minimum turn out or majority and I write as a Brexiteer.  By those very actions they have produced the biggest crisis since 1956 another date that means nothing to young voters. In its present form the Tory Party has outlived its usefulness where an incompetent Home Secretary with as much appeal as a rotten tomato was chosen as kingpin in order to prevent those more competent to succeed. She failed dismally with appointments to chair the inquiry into child abuse and her appointee into Grenfell has admitted within 24 hours that he will be unable to satisfy the reasonable requirements of residents. The buck has stopped right in her kitchen where she seems to be cladded to withstand the heat.

A country must be supported by a pillar of justice that is respected by all and funded to that end.  That requirement has been forgotten and/or ignored for years.