STILL NO REPLY FROM HCTMS 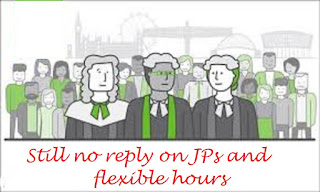 On Wednesday July 26th I posted the following:-

With increasing concern at the plans of HMCTS to impose extended hours for court sittings Twitter has been a useful pointer.  On Inside HMCTS Blog there is published a series of questions and observations to the organisation including by a couple of crown court judges.  Surprisingly there is not a single word referring to or written by magistrates except an unanswered series of questions I noticed yesterday.  I copy that part below and will do similar when a reply is published.
Have you secured sufficient numbers of magistrates to the proposed rota for extended hours? Similarly have you DJs in place. If to my first question the answer is "no" will you attempt to use DJs more often? Have you sufficient of them for your proposed needs? Do you have a division of sittings in mind for JPs and DJs?

No reply is yet published. Check for yourself here again.