WITNESSES & DEFENDANTS MUST NOT BE VEILED IN COURT 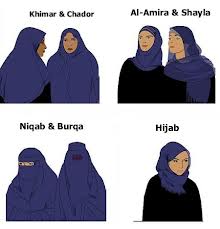 â€œThe Judicial Studies Board has recently published in 45 pages â€œFairness in Courts and Tribunals: A summary of the Equal Treatment Bench Bookâ€.

Considering this guidance is aimed at judges and magistrates [and others involved in the courts system] much of it is like feeding a grown manâ€¦.oopsâ€¦â€¦a grown person of either or indeterminate sexâ€¦â€¦.with a spoon. However where perhaps guidance might be very useful; on the subject of face covering the message is vague. Perhaps that is at it should be. Judges and magistrates must be able to use their discretion. Society expects that discretion to be exercised wisely. The consequences are grave if that facility is found wanting. The relevant paragraphs re the veil are copied below."


For those Muslim women who choose to wear the niqab, it is an important element of their religious and cultural identity. To force a choice between that identity and the womanâ€™s involvement in the criminal, civil justice, or tribunal system (as advocate, witness, party, member of court staff or legal office-holder) may well have a significant impact on her sense of dignity and would likely serve to exclude and marginalise further women with limited visibility in courts and tribunals. This is of particular concern for a system of justice that must be, and must be seen to be, inclusive and representative of the whole community. While there may be a diversity of opinions and debates between Muslims about the nature of dress required, for the judicial system the starting point should be respect for the choice made, and for each woman to decide on the extent and nature of the dress she adopts. Any consideration concerning the wearing of the niqab should therefore be functional and appropriate to the circumstances of the particular case. The primary question is: what is the significance of seeing this womanâ€™s face to the judicial task that must be performed? How does the ability or not to observe her facial expressions impact on the courtâ€™s decision-making, given her particular role in the proceedings? A distinction can be made between situations where this may be useful or important (for example, when assessing the evidence of a witness, particularly one whose evidence is in dispute), situations where it is essential (for example, for purposes of identification), and other situations where it may not be of any relevance (for example, for court clerks or ushers or where formal evidence which is not disputed must be given by a witness).

Victims or complainants. It is important that people are not deterred from seeking justice or from getting a fair hearing as a result of exclusion from the court process. Where possible a woman wearing a veil should be permitted to give evidence, either in court in her veil, or with the assistance of screens, video links or, in appropriate cases, by clearing the public gallery if she is happy to remove her veil. The most appropriate course will depend on the issues in the case. As with any consideration of permitted special measures, this is a point on which a decision should ideally be reached after discussion at a case management or preliminary hearing, rather than at a final hearing in open court. A short adjournment should be given to enable the woman concerned to seek guidance.

Witnesses or defendants. Similarly, a sensitive request to remove a veil may be appropriate, but should follow careful thought as attending court itself is a daunting prospect for witnesses and may affect the quality of evidence given. The experience of many judges has shown that it is often possible to evaluate the evidence of a woman wearing a niqab, hence the need to give careful thought to whether the veil presents a true obstacle to achieving justice. Where identification is an issue, it must be dealt with appropriately and may require the witness to make a choice between showing her face or not giving evidence. Again, special measures may be available to mitigate the difficulty.

Advocates. The starting point should be that an advocate wearing a full veil should be permitted to appear wearing her veil. The interests of justice will be paramount and you may need to consider whether, in any particular circumstances which arise, the interests of justice are impeded by the fact that the advocateâ€™s face cannot be seen or (if this be so) the advocate cannot be heard clearly.â€

"Should a government lead or should it follow?  I suppose that or a similar question was common in ancient Athens.  On a very basic level governments don`t get elected unless there is the support of a majority.  But after that it seems increasingly that to be a follower is the mantra of the government of the day; excepting perhaps within the law when individual whims are aired to test public opinion.  The Lord Chief Justice is a perfect example of putting a wet finger in the air to test the wind`s direction.  A witness or defendant wearing or not wearing the niqab in court is surely a matter which should be decided at the highest level and the directive applied at courts from the lowest to the similarly highest level.  From J.P. to supreme court judge all would know where the line had been drawn.  Those who chose to defy the ruling whether by refusing to discard such garb in court or by allowing such to be worn  in court would know precisely where they stood.  And so it should be.  The LCJ however has put the matter out to â€œconsultationâ€.  I call that a cop out."

In 2016 Lord Neuberger is quoted as stating that women should not be allowed to cover their faces with veils in criminal trials.

In May this year at Westminster Magistrates` Court before a District Judge two accused women were allowed to appear with one of them having her face totally obscured by a veil; and the other with only her eyes showing (according to the court artist). In view of the huffing and puffing of previous judicial observations this is not a satisfactory state of affairs especially for those J.P.s who preside in the lower court. The nettle must be grasped with firm advice that witnesses and defendants must remove such veils in court.