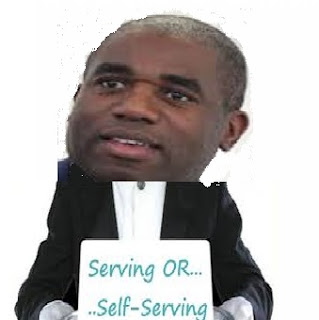 I must declare that I have never had any respect for David Lammy M.P. IMHO he is a self seeking publicist and will do or say anything regarding supposed bias against individuals who are self describing ethnic minorities. No sooner had the referendum result been announced late June 23rd last year than the morning headlines were David Lammy M.P. arguing for a second one to get the "right" answer. Somehow or another using influence unknown to me he persuaded David Cameron that he should carry out a review of the treatment of aforesaid ethnic minority people within the criminal justice system.  I have written  this blog as a labour of love for over nine years and I don`t intend to burden myself with reading the 108 pages of the review; just the introduction where in addition to a link to the final Report you will notice said gentleman`s picture on the page. That speaks for itself on his underlying personality.   I draw your attention to the following paragraph copied below:-

Apart from there being no statistical evidence for the above; "more confidence" is purely subjective, in all my years on the bench I detected no bias from white colleagues at any time towards those of ethnic minority status.  Some will say; ah.......but you would have had unconscious bias against black people.  To that I would answer........bollocks.  Now my experiences were not unique.  I will admit that amongst the coterie of 29,000 magistrates as was  there probably was a small minority who might have exposed their inherent discrimination but they would have been swiftly brought to order by their colleagues.

It is people like Lammy who spread the discord. They forever preach of discrimination where it exists only in the mind of the accuser. It is just another sign of objectivity in the CJS being driven by so called "victims" such a term often in my experience being used by CPS and others prior to conviction when the correct term is "complainant". Similar processes are at work when university chancellors agree with the concept of "safe spaces" for those who fear being offended by opposing ideas.  Truly my fears of approaching 1984 in some previous posts are being realised quicker than I can comment upon them.