NO JAIL = NO PUBLIC CONFIDENCE 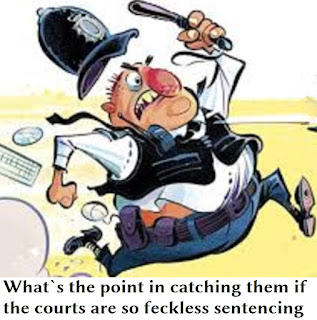 The current on line edition of the Bath Chronicle has the following on its front page:-

"Michael Stephen Phillips, 50, of Haycombe Drive in Twerton, was given a suspended prison sentence after he admitted assaulting a woman in Stothert Avenue, Bath Riverside. Magistrates noted the following aggravating factors: â€œdomestic violence, nature of injury, sustained assault on a vulnerable victim plus previous conviction against same personâ€. Phillips was committed to prison for 16 weeks, suspended for 18 months. He must take part in a building better relationships programme for 42 days and a restraining order was made. He was ordered to pay Â£250 in compensation, a Â£115 victim surcharge and Â£85 Crown Prosecution Service costs".

The fact of not imposing immediate custody whatever the personal circumstances of this offender, circumstances which the reporter deemed unnecessary to write up, is nothing short of disgraceful if the public is to have confidence that our judicial system is one in which they can have confidence.   When that confidence is eroded so is a pillar of our democracy.