THE LAW AND ANIMAL BEHAVIOUR 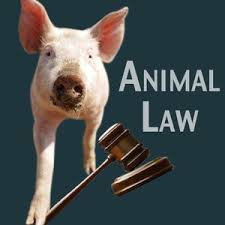 Animals usually feature in the legal pages and reports when they attack a human being, escape from captivity, save their owner from a fate worse than death, help to capture criminals etc etc.  Images appear when their expression seems almost human like.  Indeed last week an attempt to assign copyright of a monkey`s image to the monkey itself failed. However a more interesting and some would say sinister case is taking place in Scotland where a defendant is accused inter alia of training his dog to perform a Hitler salute to promote his alleged anti semitic views. Where can this progress in law and disorder end up?  Amongst commonly owned animals horses and pigs are perhaps the most intelligent and responsive to being trained by their human masters and mistresses. The latter species for obvious reasons perhaps lends itself to being used in demonstrations against Muslims and/or Jews. I wonder what police reaction would be if a nazi badged porker was included in such a demonstration? Probably a public order charge would be levelled against its owner.  Now that would be an interesting case to report here.