POLICE & PCCs/SOME ARE A DISGRACE 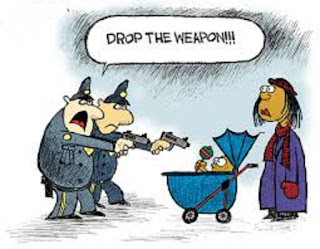 I suppose there`s a good case to answer insofar as police and Police Crime Commissioners is the group of public sector workers most often in the public eye.  That being the case one would have thought that in the light of past behavioural, disciplinary and procedural problems members of those bodies would ensure for their own employment prospects that their actions were acceptable to inquisitive public scrutiny.  One would have been wrong. Following are a just a few very recent cases reported this month where it is hard to believe that some individuals consider themselves perhaps not above the law but certainly above scrutiny.

In Worcestershire a Police and Crime commissioner does a deal which certainly was and is worthy of investigation.

In Wiltshire a PCC is under scrutiny for his handling of the job.

In the West Midlands a police officer`s remarks whilst wearing a body camera are so outrageous it`s hard to believe he was accepted as being suitable for his job.

In Leicestershire four police officers are sacked after a prolonged investigation into profoundly un police officer like remarks made in WhatsApp exchanges.

These examples are not those of so called political correctness.  They go to the heart of what is just totally unacceptable as far as police are concerned.  With regard to the Police and Crime Commissioners they are just the latest in a long  line since the office was created a few years ago.  When such people have the power to hire and fire Chief Constables their history, credentials, behaviour, actions and remarks must be equal to the highest standards expected of those in public office.  How these two can remain in position escapes me.  One thing for sure as a result of their misdeeds real and apparent  and those of dozens of other PCCs is that a democratic vote isn`t necessarily the best way to fit the correct individuals in high public office.