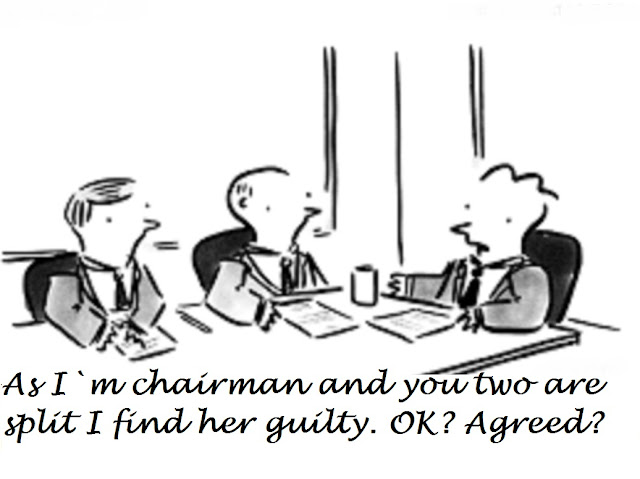 For the sake of argument for this post please assume there are main three levels of jurisdiction in this country: the magistrates court and its Scottish equivalent the Justice of the Peace Court, the Crown Court and its Scottish equivalent the Sheriff Court and the Supreme Court of the United Kingdom. The Crown Courts sit with a judge and jury.  In Scotland the procedure followed might either be solemn procedure, where the Sheriff sits with a jury of fifteen or summary procedure where the sheriff sits alone in a bench trial.The lowest courts in both jurisdictions can be presided over by a single J.P. in Scotland or a District Judge(MC) in England & Wales. Those individuals are in fact acting as both judge and jury if not executioner. In England a single magistrate can now act on supposedly simple speedy summary cases eg failure to have a valid ticket to travel on London buses or tubes. There is reason to believe that current requirement to have as the norm three magistrates per bench and two if absolutely no third is available is not carved in stone and that we will  increasingly experience courts sitting with the single professional District Judge presiding. But that is looking in the crystal ball.

In Sheriff Courts under solemn procedure a requirement for a verdict is simple; the jury is asked its decision and whether it is by majority or unanimous. Crown Court judges will ask for a unanimous decision or a majority of 10 to 2 if that change would render a verdict. Anything else and a mistrial would be declared.  The Supreme Court is constituted so that a majority decision is accepted where unanimity cannot be achieved. The form of verdict is announced publicly in both courts. Where it is not announced publicly is in the Magistrates` Court with a lay bench where a bench of three having made its decision does not indicate whether it is a majority or unanimous decision.  During my active career I found and still find that this is not justice being seen to be done. It is secret justice. At the very least declaring a majority decision would give an indication as to the strength of the case presented by the defendant declared guilty.  At the most it would allow the offender who had the means and/or the ability to consider the option of appealing to the Crown Court where the case would be reheard in front of a judge sitting with two different Justices of the Peace. Indeed taking it a step further, a majority decision could be grounds alone to appeal.

I am sensible enough to know that my  opinion is not worth even twopence. Such an extension of citizens` rights is totally contradicted by government actions over the last 20 years. Courts are increasingly sacrificing justice for pounds.  Magistrates` Court closures affect the poorest of defendants with much increased travel costs; the virtual abolition of Legal Aid for all but the very poorest of the poor has led to increasing numbers of equivocal guilty pleas as has the imposition of court costs eg the now terminated Criminal Courts Charge based on the MOJ`s demands that courts should be self financing: in itself a concept that is incompatible with a nation that pre supposes Justice to be a pillar of democracy.

All this is taking place with a supine parliament the competence of which is being shown almost daily to be devoid of intellect except for a minority of individuals who whilst not being a Burke or Fox or Churchill or Bevan still appear to have a philosophy of good intent for the individual citizen as the basis for their involvement.