SENIOR JUDICIARY HAVE NO CAJONES 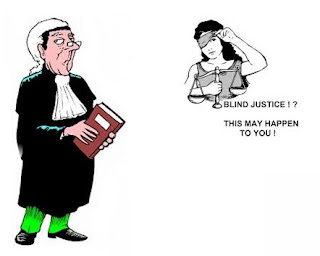 Subsequent to the election of 2010 when G. Brown made his exit from 10 Downing Street and after kisses in the Rose Garden a certain N. Clegg and D. Cameron discovered that the objective of politicians before anything else eg philosophies, money, integrity or relationships is power and as much of it as possible.  Having acquired that state of being and appointing a cabinet to implement austerity; a laudable intention then as now, the appointee as Secretary of State for Justice and Lord Chancellor was Kenneth Clarke, he of the "my part of Nottingham loves the EU" party. When the Treasury issued its demands that year he was the very first Secretary of State to knock at the door of 11 Downing Street to offer his 23% reduction in his department`s budget. Plus sa change etc Yesterday`s budget included a requirement to make  Â£600m in savings at the MOJ by the end of the decade. The Treasury has committed to reduce the departmentâ€™s spending from Â£6.6bn in 2017/18 to Â£6bn by 2019/20.  This forecast indicates a 40% real cut in funding for the Ministry of Justice from 2011 to 2020. One can almost hear the sound of the knife scraping the justice bone because the meat has already been removed.

Our concept of justice underpins our whole way of life.  The Babylonians lent on by Moses a thousand years later pointed the way. Alfred the Great had his input. Magna Carta is rightly regarded as another milestone in the journey from the savagery of the jungle to the rights of man. The installation of Justices of the Peace nationwide 650 years ago and the right of indicted individuals to have a trial by jury were and are steps in the process to where we are today when a level playing field of the law court is witness to argument based upon an equality of arms before a blindfolded lady justice.  Or so it was but no longer.  The withdrawal of legal aid for all but the poorest has laid bare the myth of equality of arms.  A Crown Prosecution Service cheerleading increasing guilty verdicts irrespective of the state`s upending its end of the playing field  to achieve those verdicts makes one consider whether it would hope that ever more success would be measured by 80% guilty verdicts or 90% or perhaps 99% as in China.  Increasing court charges to make "offenders pay"; a policy by the toadying ignoramus Chris Grayling who also banned books from prisoners was rightfully rescinded by his successor.  Sacking thousands of prison warders and then looking aghast as prisons became places of fear for many inmates seemed to bemuse those in political authority although it provided the gloating MOJ press office with substance when announcements were made that recruitment of prison officers was going ahead successfully although numbers are well below those previously in place and required for prisons at 99% capacity.  A similar scenario can be sketched out about police, probation, forensic science and security forces allied to law and order.

A country cannot put justice on a financial diet; indeed one likely to be an anorexic diet without damaging this pillar of our society to all our social detriments. Yet that is precisely what is happening. Only mass disobedience by the senior judiciary to their constitutional concept of being seen but not heard has a chance of altering this situation and sadly I don`t think their bewigged honours have the cajones for that.