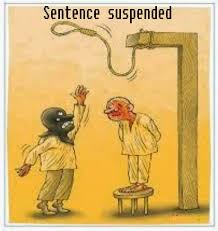 Today December 1st the prison population is 86,859. Prison capacity is 87,411. That equates to the fact that prisons are at 99.37% of their capacity. It probably is not unconnected to the fact that suspending custody seems to be a preferred option when at all justified and at times without that justification. My last sitting was in March 2015. According to the Sentencing Council "the percentage of cases sentenced to a wholly or partially suspended sentence decreased sharply, from 6.0% in 2013â€“14 to 0.5% in 2015â€“16. This decrease coincided with the abolition of suspended sentences in the Magistratesâ€™ Court for offences committed on or after 1 September 2014".  I therefore have no first hand knowledge of the current situation. But I do read court reports.  Caught driving whilst disqualified this person was given custody suspended. Why he was not banned for an increased period but subject only to six penalty points only those present in court would know.  A registered sex offender who re-offended in what one assumes in a similar fashion was given a suspended sentence at a magistrates` court. Perhaps a legal eagle can explain this apparent contradiction vis a vis Sentencing Council as above. However my main thrust today is the apparent proliferation of suspended custodial sentences notwithstanding again the figures above. In 2016, 56,317 offenders had a suspended sentence order imposed, representing five per cent of offenders sentenced. In the twelve months to June this year 1,216,915 were sentenced at all courts of whom 88,091 were sentenced to immediate custody and 55,450 to custody suspended. Figures for 2010 were 1,334,083, 103,770 and 48,976 respectively.  There are those who shout loudly that far too many offenders are imprisoned.  This dovetails nicely with the severe restriction on prison capacity; a situation wholly owing to government policy.  The single irrefutable fact is that when offenders are incarcerated the public is protected from their further offending. That fact is debated by criminologists as being no antidote to further re-offending after release to the detriment of that very same public.

I doubt there will not be similar controversy for decades to come.