SUCH MAGISTRATES SHOULD QUIT 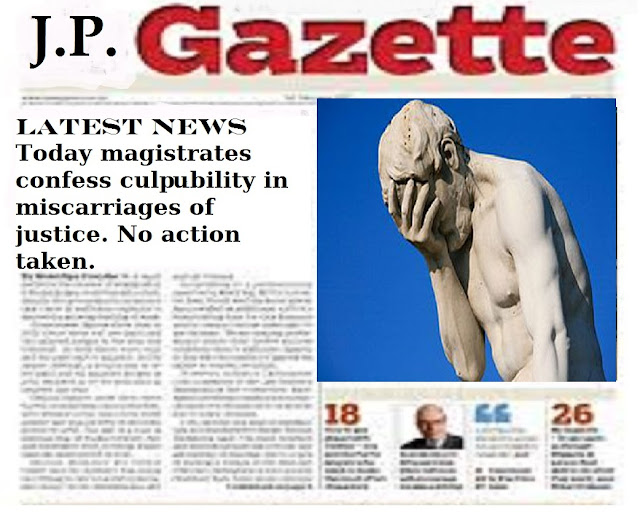 BuzzFeed, a provocative on line agency, in association with the Magistrates Association this week published a lengthy account of the situation from both sides of the bench of unrepresented defendants in the magistrates courts.  Its detailed account could be summarised simply by two facts; defendants without lawyers are prone to be convicted in circumstances where legal representation might have got them off or their punishment mitigated and magistrates are only too aware of such failings and are too mealy mouthed to do anything about it.  I posted comprehensively on this subject 28th September 2015 where I proposed simple inexpensive measures to counteract the situation.  However with regard to the BuzzFeed quotations from magistrates, assuming their veracity, I have nothing but contempt for former colleagues who blithely admit to miscarriages of justice or unfair conclusions whilst they were in a position to mediate. Of course there will be the usual cry of magistrates are merely overseeing the process and must not enter the legal fray.   This cop out must be ended.  Magistrates and of course District Judges(MC) in an era where the power of the state is vastly superior to those of most defendants must now assume an inquisitorial role in the interests of justice being done and being seen to be done. My contacts with former colleagues convince me that the independence of the magistracy where it really matters, in the courtroom, is now compromised. JPs are trained to kowtow to the legal advisors who are assuming more influence than just offering legal advice.  This will require some magistrates with memory of times past to impart to their newer colleagues that almost forgotten spirit of radical thought and confidence to assist unrepresented defendants when such defendants exhibit blatant inability to assist themselves.

Some of the magistrates quoted by BuzzFeed and some results eg

"defendants without lawyers are being found guilty of crimes they did not commit and being sentenced too harshly."

"Theyâ€™re not being fairly treated, through no fault of the court."

"many magistrates said they were concerned that those without lawyers faced being found guilty of crimes they did not commit."

"I cannot recall any cases this year where non-represented persons defended themselves effectively.

It amazes me that magistrates can sit through proceedings over which the chairman should have control and wash their hands over such abominations in the name of justice.  They should hang their heads in shame and offer their resignations if they fear HMCTS more than their own consciences.  Access BuzzFeed here.