AND THEN THERE WERE CUTS 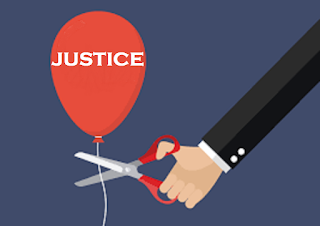 A new year and amid an overdue recognition by senior legal eagles on both sides of the bench that the quality of British justice is in freefall from which it might never recover it is curious to read the last 2017 edition of the Scunthorpe Telegraph copied below  highlighting what I too recollect at my own court was happening around two decades ago.  It all seems so petty now with not an inkling of the savage financial cuts which began in 2010. Kenneth Clarke who is merrily trying to usurp the decision of the British public and have the Leave decision overturned didn`t just turn a blind eye to imposed cuts as Justice Secretary in 2010; he thoroughly encouraged them with a 23% reduction in funding that year and was proud to proclaim he was the first Cabinet Minister to satisfy the Treasury of having done its wishes.

"One piece of news hitting the headlines in Scunthorpe 20 years ago was the decision to stop the supply of free biscuits to magistrates. John Towndrow, vice-chairman of the Humberside Magistratesâ€™ Courts Committee, revealed it cost Â£400 a year to provide the local justices with biscuits to dunk in their coffee and tea. He said the committee had been faced with making savings of Â£145,000 that year and needed to cut the annual budget by three per cent over the next three years. The cuts had led to the closure of courts in Barton, Brigg and Epworth, job losses and under-funding for ushers, with clerks on occasions having to take over their duties.

â€œI am bitterly disappointed that my fellow magistrates have lost the only perk they had, namely the free biscuits with their tea or coffee,â€ Mr Towndrow said.
â€œHowever, the search for savings in every department has led to swingeing cuts. I am sure the local justices will appreciate the reasons for the withdrawal of their biscuits.â€

The cutbacks also saw filter coffee-making machines in Scunthorpe removed and replaced by jars of instant coffee, tea bags and flasks of hot water. Mr Towndrow said previously the coffee had cost 20p a cup, but now the expense had been reduced to only 4p.However, one justice of the peace, who asked to remain anonymous, told the Telegraph: â€œThis really takes the biscuit! It will only save pennies over the year.â€"