HENRY VIII AND ROTTEN TOMATOES FOR THE MANY NOT THE FEW 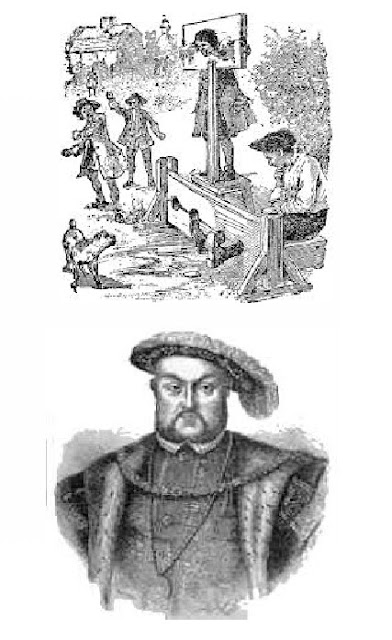 "From today (29 January), 9 further terror-related offences will fall within the scheme which allows the public to challenge sentences handed out by the courts."

That sentence is the headline of a press release from the MOJ. Not satisfied with putting obligations to report those suspected of connection with terrorism upon landlords, estate agents, bankers, lawyers and uncle Tom Cobley the spiders at the centre of the Petty France web are seeking to have public opinion increase sentences on those convicted of terror related offences. Not satisfied with offering the judiciary so called sentencing guidelines about which the public has quite rightly no particular interest or knowledge, this government and the Ministry of so called Justice the senior incumbents of the latter being moved in and out like players in a game of musical chairs, seem only to be interested in a week`s favourable headlines.  There is absolutely no logic to this and similar actions. In the release we are informed that, "141 criminals had their sentences increased, helping victims and their families get justice. This is a small proportion of the 80,000 Crown Court cases heard each year, where in the clear majority the judiciary get it right". So because 0.18% of cases are appealed by the Attorney General a whole new avenue of legal activity is opened. If there were true philosophy in this regard it is not unlikely that there would be at the very least a substantial minority of opinion which would welcome the opportunity to reinstate the death penalty for particularly heinous murders multiple murder in the cause of terrorism being a certain candidate. Allowing public opinion to manipulate judicial decision making is no more than seeking favourable headlines from a government which has no sense of purpose and is merely looking for daily uplifts to its polling position. It began with the positioning of the "victim" to a quasi judicial role and has progressed from there.  There is no doubt that the judiciary will be undermined by this development although of course all will remain silent until they are pensioned off. Let us therefore bring back pillory and the stocks and a plentiful supply of rotten tomatoes.  At least that would be an honest expression of letting the public have what government thinks it wants.

I am no hanger and flogger but neither am I a soft hearted believer in abolishing short sentences or for society to turn the other cheek. But I do believe that for justice to prevail there are many actions that government should take in particular with regard to legal aid and the belief that a digital image can substitute for reality.  I am however just bleating in the wind.  The authoritarianism seeping into our daily lives will only be appreciated when Cobynista Marxists rule over us and Henry VIII powers are in the hands of those who would wield them for the many not the few to our eternal cost.