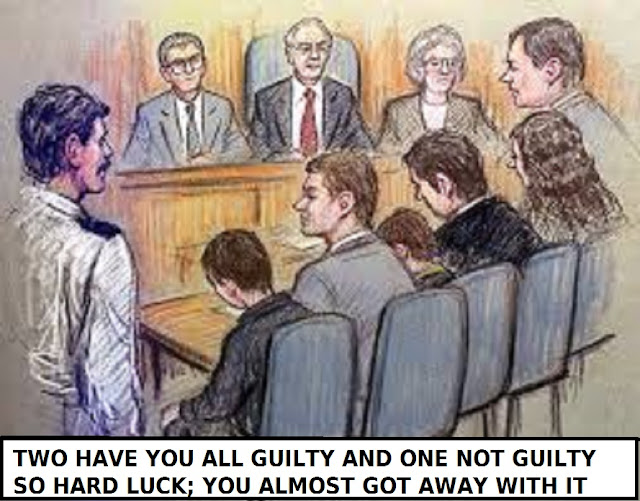 Even those who had no knowledge or interest in the Parole Board a month ago will surely have learnt something new to their advantage.  Another veil on the face of the justice system has been allowed to drop revealing that since its inception this body of the "great and the good" has been more secretive than the Masons when it comes to public scrutiny although I was pleased to note yesterday that the latter is baring its chest to allow public view of its innards. The courts too are on the same ladder to allow public scrutiny to some limited extent. Scotland has allowed cameras in court although not "live" as in America.  The Supreme Court has gone further with its proceedings indeed "live".  The internal workings of a jury are still sacrosanct although IMHO it is long overdue that all aspects of that system from eligibility (jurors currently do not need to be British citizens or be examined in their comprehension of English language) to composition; it is nonsense that a jury comprises an even and not an odd number of members.  But the deliberations by magistrates in the retiring room are not so open to scrutiny.  When I was appointed there was no requirement for the chairman to explain how the bench reached its decision.  Many did give a brief summary but it was only when it was decreed that its reasons had to be made public and recorded in the court files that attention was paid by chairmen to the views of his/her colleagues and "I feel he`s guilty" remarks were rightly criticised and replaced by reasoned logical debate.  There is, however, a very large gap in the openness as we have it today: nobody outside the retiring room knows whether the bench reached a unanimous or majority decision. I have been of the opinion for many years that this is a situation which fails the "openness" test. Juries under direction can reach a publicly stated majority of 10:2. If convicted defendants in the lower court were aware that it was a 2:1 guilty verdict then they might feel it worthwhile appealing the verdict and/or the punishment. Indeed there is an argument, however tenuous, that such a verdict should allow an automatic appeal at crown court for those who wished and/or could afford to pursue the matter.

Recently Lord Thomas of Cwmgiedd the former Lord Chief Justice has been reported as saying, "The answer to most of these problems (referring to openness of Parole Board) is open justice."  Surely a similar argument, discounting expense or politics, applies to magistrates` courts?