THE DEA(R)TH OF COMMON SENSE 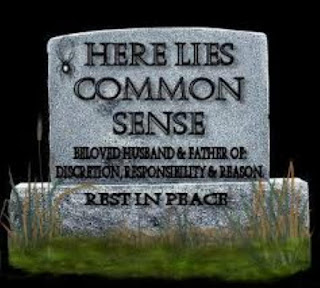 Amongst the qualities required for appointment as a magistrate when I applied was common sense. Those two words were actually written in the application form. That quality is not indicated at all in the current application form or notes which include the following:-

You need to show youâ€™ve got the right personal qualities, for example that you are:
You also need to be able to:
When I made an official inquiry many years ago as to why this personal quality was omitted I was told that what might be "common" to some people might not be common to others who were immigrants or unfamiliar with the mores of this country and would therefore be at a disadvantage.  British citizenship is not a requirement to sit as a J.P.; a rule with which I profoundly disagree.

It seems, however, that the good J.P. folk of Dorset don`t know their own rules. Rachel Small , a recently appointed magistrate interviewed by the Daily Echo with regard to magistrate recruitment, is quoted as saying inter alia, "They can come from all backgrounds, but must have "common sense and personal integrity".  Her full interview is available here.

From my years on the bench and nine years of seeking out various goings on at magistrates` courts for this blog the lack of common sense amongst recently appointed benches  in recent years seems to be a logical conclusion for some strange or very unusual decisions.

The magistracy is far from being the only organisation where common sense is noted for its absence. I don`t know the qualities essential to being an Inspector in Surrey Constabulary but a brief reading of the case of an officer cleared of a misconduct charge of stealing colleagues` biscuits  leads me to think that perhaps some training in such is called for there.