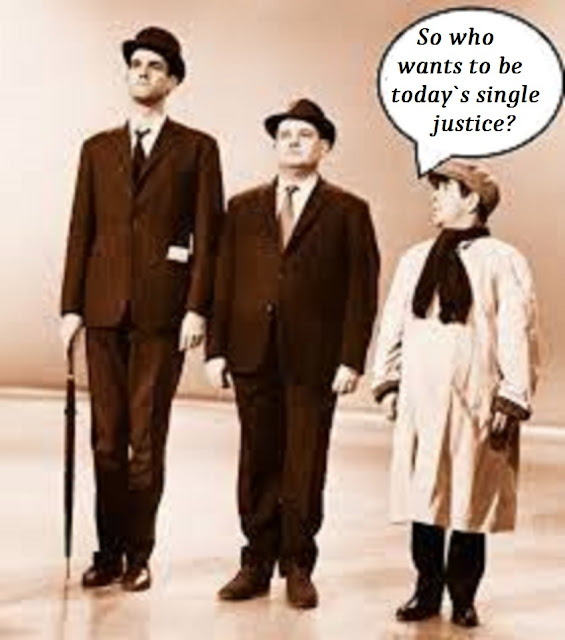 The Single Justice Procedure is governed by The Criminal Justice and Courts Act 2015.  Many magistrates, I believe, are not fully supportive of the process.  The Magistrates Association has yet to make clear its opinion.  As with some decisions made by individual JPs as to where they want to sit the SJP is for volunteers.  But more to the point it is not justice seen to be done in a court the doors of which are open for anyone to witness the daily activities where  c95% of the criminal justice system takes place. It is a clear example of where the Ministry of Justice and its  wunderkind, Her Majesty`s Courts and Tribunal Service, know the price of everything and the value of naught.  It is a system to save money pure and simple.  It is a moot point whether or not justice is done behind these closed doors where SJP takes place.  Here is a recently published report in the Norwich Evening News.

Our once admired criminal justice system is being salami sliced to an unrecognisable tick box procedure of an assumption of guilt which the defendant must overturn.  It doesn`t just take place at crown courts where the shifty shenanigans of the Crown Prosecution Service often with the collaboration of the police have shown activities which every honest citizen of this country must find to be blots on our social landscape.  Magistrates are coming under enormous pressures both personal and procedural. Ever since Criminal Justice Simple Speedy Summary [CJSSS] became the watchword a decade ago  government removed its gloves and made it clear it would fight dirty to reduce costs.  Indeed the arch proponent of remaining in the EU Kenneth Clarke when he was Lord Chancellor in 2010 was the very first minister after the election to offer a reduced budget for his department in accord with the Treasury demands; 23%.  His current pathetic performance indicates just how much he values our legal system never mind the result of June 23rd 2016.  Supine individuals have followed him like chocolate soldiers in a heatwave within Petty France  to emasculate our justice system. With a prime minister who in her previous incarnation cared nothing for the rights of the individual I fear we have still some way to travel along that insidious path where only the rich and/or the famous have the wherewithal to fight the state when accused of wrong doing.