Recently the big chief of the Magistrates Association was interviewed by The Times for its law pages.  Even a man from Mars would have thought that that would be a perfect opportunity for this representative of 15,000 JPs to have made plain the ramifications for justice of the Ministry of Justice`s cost cutting and incompetence over the last few years especially when the prisons and the courts are still reeling from the policies of a certain Chris Grayling; perhaps the most incompetent cabinet minister of the last decade although there are others vying for that honour. How more wrong could our alien have been. Apart from slight gentlemanly veiled criticism of the effect on travelling times to court for some and innocuous comments on recruitment an opportunity to say it like it is was neglected.  I have no doubt that this was no oversight. The virtual removal of legal aid at magistrates` courts, the never ending problems of interpretation services, the emasculation of probation services not forgetting the financial tie up the M.A. has with some providers, the apparent intention to phase in video courts in a wholesale manner, the risk to justice of the rubber stamping single justice procedure and the apparent acceptance of the normality of two person benches........all these problems emanating from the bowels of Petty France were obvious by their absence in the interview.  So it`s same as usual. A chairman of the Magistrates Association given a public platform considers his future gong more important than risking being honest about the problems facing a society`s courts system. Once again an opportunity to tell the real truth about justice today is missed. 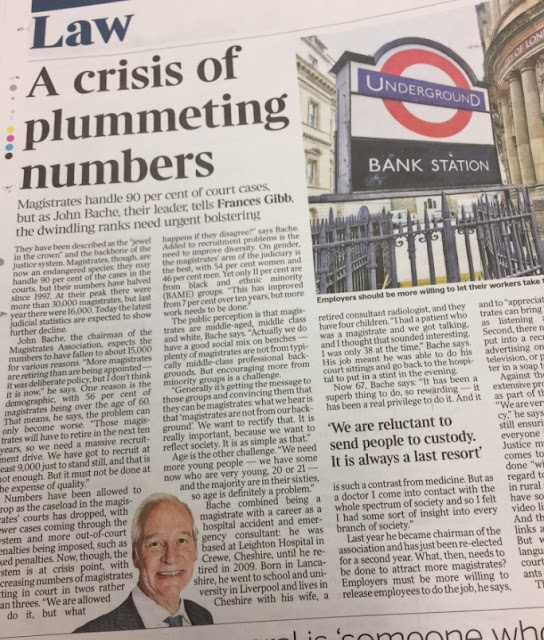