THIS JUDGE IS A BULLY 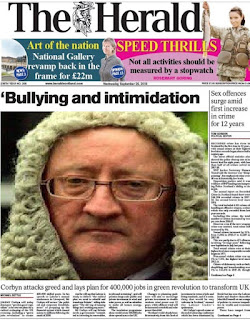 I have opined in the past that Justices of the Peace seem to be more harshly treated for alleged transgressions than members of the professional judiciary. The recent case of a judge threatening to jail a 14 year old child if she cried in court whilst her mother was giving evidence is a case in point. HH has been criticised by the Court of Appeal.

Such flagrant bullying of a minor should not be concluded with just a rap across the legal knuckles. He should be charged with misconduct. If it were a magistrate making those remarks s/he would be on the scrapheap in short order. Whether it is right that part time unpaid lay J.P.s should be dealt with on a different basis from full or part time professional judiciary is another matter to be debated at another time.