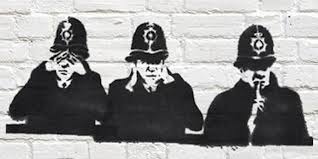 I would opine that in the age group over aet 50 a minority only has been the victim of violent crime.  That group would include most judges and magistrates  their familiarity with violent criminal offending resulting from their experiences in court and the anecdotal and statistical analyses that circulate within society. Until new years eve I was within that group. Whilst eating and drinking at a grand party where my table of ten was occupied by five couples who were strangers to each other I got into conversation with a young retiree from Whitby who told me his sorry tale of an event in August. He was cycling home on his just purchased  brand new state of the art lightweight racing bike when, on a narrow uphill section of a country road, he was verbally abused by an irate driver and passenger of a high powered Audi because he was holding up their progress. Eventually he was able to pull into a shallow lay by to allow the impatient driver to overtake. At the top of the hill a few minutes later he found his way barred by the passenger standing in the road screaming abuse. With no warning or provocation from the cyclist he severely assaulted him damaging his eye which required intensive hospital treatment and badly damaged his bicycle to the tune of thousands of pounds. A few days later he revisited the scene and discovered to his surprise that  the whole affair had been covered by the security cameras of a nearby house.  He contacted local police who viewed the footage and confirmed that they knew the alleged assailant but that they could not take the matter to the CPS owing to a lack of police manpower. IMHO a charge of ABH would not have seemed inappropriate.

Today I read a headline in the Aberdeen Evening Express and other similar journals that reads "Funding cuts force police to tolerate violence, says senior officer".