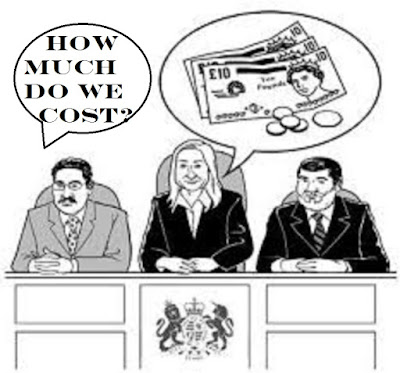 I have long opined that an unsaid policy of the Ministry of Justice is that the role of Justices of the Peace should be in managed long term decline in order that government would have  total control of the court process. In the last decade JPs` numbers have halved to around 15,000. District Judges(MC) numbers have been fairly constant over the last five years at around 115 with a slightly greater number of part time Deputy DJs. The argument that such an opinion is misguided is usually based upon the vastly greater costs of employing professional judges, ie DJs. The official statistics of the comparable costs are tabled below. 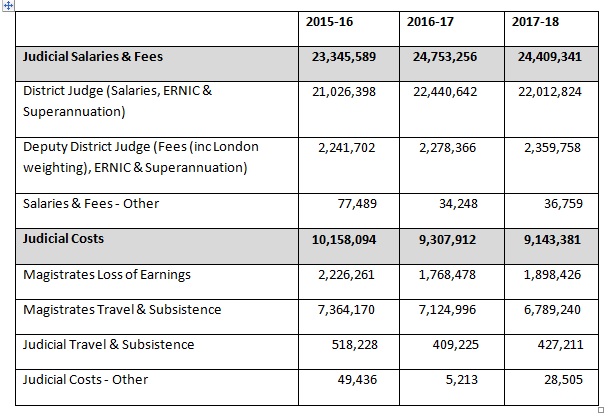 These numbers, however, have a hidden story. Taking the 2017-18 figure for DJs alone Â£22,012,824 simple arithmetic results in a cost per DJ of Â£194,803. Now consider that the current salary of a DJ is Â£110,335 with an additional payment of Â£8,000 p/a for London appointments and that the MOJ contributes around Â£8,000 towards the DJ`s pension. DJs must devote a minimum of 215 days each year to judicial business. It is reasonable to assume that about seven weeks holiday is paid for.  So in reality the individual costs about Â£120,000+ per annum in addition to the cost of holiday cover of the lost seven weeks by a DDJ of at least Â£500 per day which works out at about Â£17,500. The costs imposed to reach the figure of Â£194,803 amount to Â£57,500.  These admittedly crude calculations lead me to believe that this last figure is the cost of a qualified legal advisor sitting with the District Judge. Without knowing exactly how many sittings are performed by DJs, DDJs and lay magistrates it is impossible to calculate the actual cost of a DJ + L/A  to compare with the expenses incurred by magistrates` costs of  Â£9,143,381.  What can be implied is that if the qualified L/A attending with a DJ were removed from the calculation or replaced with a low level unqualified clerk the cost advantage currently favouring using magistrates would be considerably reduced perhaps to the level where my previously stated opinion would be likely to be implemented.