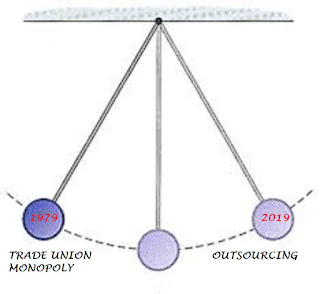 Since 2012 I have been commenting on the less than satisfactory history  of court interpreting that began with the yet to be investigated scandal of Applied Language Solutions` contract with the Ministry of Justice that year.  The MOJ for its part is regularly issuing notices of how efficient the current service is but apparently old habits die hard when it comes to that organisation`s signing of contracts.

A sub contractor for these services went out of business last week.  It is now obvious that all government departments are obsessed with outsourcing.  In the oft forgotten days of the Callaghan administration and earlier, government employees used their trade union affiliations to cause havoc to public services.  I remember the three day week of 1972 and eating by candle light.  I remember rats searching in uncollected rubbish in 1979.  There was no doubt that Maggie Thatcher`s reforms to prevent such events was welcome relief but now the pendulum has swung to the maximum of its arc.  The principle of such activities has been taken much too far. There are some services which must now be taken under direct control before their inefficiencies  and siphoning off of capital as dividends lead some naive voters to think that the antisemitic communist Corbyn has the answer to our economic problems.

However I would be being naive in thinking that that is going to happen.  Our capitalist system which has been allowed by the Conservative Party to be relatively unfettered in its greed is liable to be responsible for its own downfall. It would be poetic were it not so dangerous for the well being of us all.