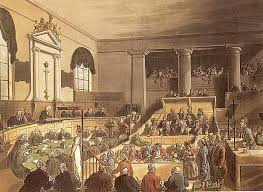 In some respects the criminal justice system doesn`t know whether it`s coming or going.  That directionless state can, I suppose, be placed at the feet of the four prime ministers of the last  decade who have saddled arguably the most important pillar of our democratic society with no less than eight Justice Secretaries each of whom had his/her "vision".  An obvious example of this antithesis to joined up thinking is the confused attitude to sentencing.  Ever since it was decided that judges and magistrates could not be trusted to sentence according to the structured sentencing system which had been inculcated into them all, Sentencing Guidelines have become the bible for all sentencing decisions from the very simplest to the most serious. The original Guidelines of 2010 have been modified as almost an annual undertaking.  The custodial powers of magistrates courts have been mooted to be increased to twelve months from the current six to being abolished altogether.  The newly appointed current incumbent of Petty France has stirred the sentencing plot yet again by her recent announcements to increase the severity of sentencing for the very most serious offences.  My own view expressed many times here is that institutions must be established to offer a non court pathway for offenders whose substance addictions are driving their offending, such offending estimated to be responsible for 70% of  violent and/or acquisitive crime.

Notwithstanding the above I was pleased to read of common situations where, in contrast to government direction to avoid immediate custodial sentences at magistrates courts, two offenders were sent to immediate jail for offences and histories which I believe all but fanatic believers in non custody outcomes would applaud. Fortunately most of us will not be involved directly as victims of crime on the streets, in the pub or in our homes but on the roads as drivers or passengers in cars and other vehicles the situation is quite different. My wife`s best friend`s daughter was killed driving her car on the M6 by a repeat disqualified drunk driver who was disqualified, using her mobile phone and drunk at the time. These two examples of society`s retribution for such offending are, I fear, not dispensed perhaps as often as perhaps some would wish. Instead the MOJ recently issued a press release to ban all mobile phone use in a vehicle including those that in most new cars are hands free.  This legislation will never happen.  It is a frightener from the weasels at Petty France in conjunction with "look at me attention seeking MPs" to divert attention from matters which do require our attention; namely returning legal aid provision and CPS numbers to 2009 levels notwithstanding proposals to reduce even further the numbers of magistrates courts.

That is the system which is being undermined every day by a government which regards it as a necessary evil to its long term target of control by managed decay. Perhaps there are those who look upon courts of the 19th century as the best application of justice for the common man?