ONLY THE NAME WILL BE THE SAME 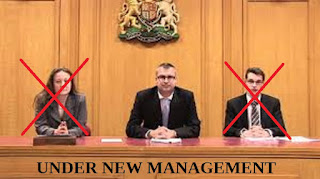 There are some who opine that magistrates or retired  magistrates should not take part in activities such as blogging. Unlike the paid judiciary whose livelihoods and pensions depend upon not biting the hand that feeds them magistrates are volunteers.  They offer opinions and knowledge that often is not listened to or does not percolate through the established layers of communication.  Indeed the MOJ was so concerned to keep the so called independent magistracy under its control that last year it advertised for magistrates to be appointed "leadership magistrates". So unlike the previous senior magistrates who were elected by their peers via the Magistrates Association or from the Bench Chairmen`s Forum  and who liaised with the various judicial committees these incomers would be beholden to the Lord Chancellor for their positions and opinions whether or not the latter were truly representative of their 15,000 colleagues. Sad to relate this is just another small step towards the bowing out of the independent magistrate as chairman over the court which bears his/her name. The name will be the same but the game will not. A lone District Judge (MC) will range over our courts and trial by a jury of three will be but a historical footnote for future generations.