NOBODY EXPECTS THE SPANISH INQUISITION AT THE JCIO 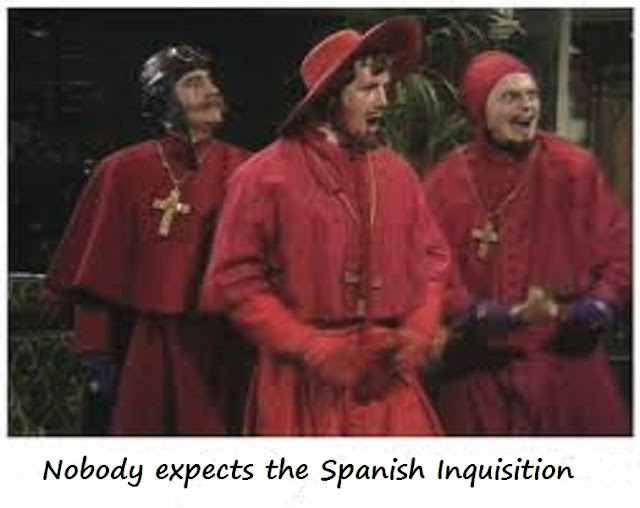 Magistrates by their very nature are hybrids being not professional judiciary but still being referred to by all parties as indeed members of  the judiciary albeit junior members. When it comes to the ways in which magistrates` behaviour or words can be interpreted as bringing the magistracy into disrepute it is fair to say that contrary to taking a logical view bearing in mind the above stated difference magistrates are arguably held to a higher and more pernicious standard of conduct than the paid civil servants who are the professional judges, from the lowest Deputy District Judge to members of the Supreme Court.  It seems that their straddling of two positions judicial and private is not a consideration for those who preside over judicial complaints: in the first instance that is the local advisory committee. Current advertising for new applicants emphasises that "ordinary people can become magistrates". But these "ordinary people" are treated in possible cases of misconduct of a minor or serious nature arguably  more severely than their professional colleagues.

One would have thought that magistrates, if accused of any form of misconduct, would have a professional body to which they could look for expert assistance.  Such bodies as the BMA, AOP,  Pharmacists' Defence Association Union exist as the protective bodies for doctors, optometrists and pharmacists respectively. Many similar organisations exist for most trades and professions.  Magistrates are on their own when confronted by authority. The only body acting as a forum for J.P.s is the Magistrates Association; a charity which has about 80% of the 15,000 magistrates as paid up members.  However it exists under a Royal Charter as an educational organisation with very strict limits on its activities.

We are proud to operate under our Royal Charter granted in 1962 and updated in 2013. We are established and incorporated to promote the sound administration of the law, including, but not restricted to, educating and instructing magistrates and others in the law, the administration of justice, the treatment of offenders and the prevention of crime.
Promoting the magistracy

As the voice of magistrates we work hard to promote the work of our members and the institution of the lay justice system. We speak to key decision-makers in Parliament and Government, as well as the media and other organisations in the criminal justice field. Our in-house policy team researches key topics relevant to the magistracy as well as monitoring changes in the law to ensure our members are supported.
Supporting our members

We are here to support our members. Our members receive our bi-monthly magazine which provides a range of supportive articles and information valuable to any magistrate. They also receive access to our members' area which contains a variety of materials designed to assist magistrates in their duties. The MA provides a variety of training and events at national and local branch levels.


What the MA does not do is providing protection and representation for its members facing disciplinary procedures. For those magistrates who find themselves the subject of a complaint however minor the process can be soul destroying.  The Judicial Rules (Magistrates) under which the proceedings are undertaken run to 19 pages of small print and 151  clauses many with numerous sub clauses.  Magistrates are examined by a conduct panel consisting of three members of the advisory committee to which the complaint was made originally. Magistrates must speak for themselves when told to give evidence.  It is extremely unlikely that the "prosecution" will allow a legally qualified representative of the "defendant" to give evidence on his/her behalf.  It must be emphasised that this is not a court of law: indeed such a court especially at the higher levels possesses  to a certain degree a level playing field and equality of arms. It is not unlikely that the current process IMHO is in breach of human rights legislation.  When a complaint is made, on receipt of the report from the conduct panel the Judicial Conduct Investigations Office must examine the papers submitted.  If the "evidence" warrants it the case is then referred to an investigating judge. The matter then depending on circumstances can be referred to a disciplinary panel or direct to the Lord Chancellor and the Lord Chief Justice. The requirements of the investigation by the judge are listed under 15 clauses.  Where a magistrate has indeed been found guilty of misconduct by JCIO a very brief report including the offence, judgement and sanction is published on its website. This very brief truncated account of a situation which can take over a year to its conclusion is the very tip of the judicial iceberg of investigative process.

Whether or not a magistrate in such a situation can take legal advice depends upon the depth of his/her pockets. I would opine that to have legal advice throughout the process would necessitate many, perhaps dozens of letters and other documents being thoroughly scrutinised and replies being made as appropriate to the investigation. If a legal presence is required at any stage that too would be a costly business especially in London.  It is not unrealistic to assess such costs in five figures.  The Star Chamber was an English court which sat at the royal Palace of Westminster, from the late 15th century to the mid-17th century (c. 1641), and was composed of Privy Counsellors and common-law judges to supplement the judicial activities of the common-law and equity courts in civil and criminal matters. The Star Chamber was originally established to ensure the fair enforcement of laws against socially and politically prominent people so powerful that ordinary courts would probably hesitate to convict them of their crimes. However, it became synonymous with social and political oppression through the arbitrary use and abuse of the power it wielded. I would suggest that the iniquitous procedures employed against magistrates has now become itself a star chamber. Despite the 19 pages and 151 clauses or perhaps because of them, the treatment of magistrates, including those retired and placed on the supplemental list, constitutes oppression through the arbitrary use and abuse of power.

When the disgrace of possible removal from the magistracy is the Sword of Damocles hanging over every magistrate faced with the disciplinary process it is not unlikely that some (many?) "repent their sins" in agreement with an outcome which allows them to continue in post. This is rather like the equivocal  early guilty plea of which most readers will be familiar and which became more apparent after the imposition of the Criminal Courts Charge in 2015.  Only last month a magistrate was issued “formal advice” for retweeting a tweet which the Judicial Conduct Investigations Office  considered politically insensitive. 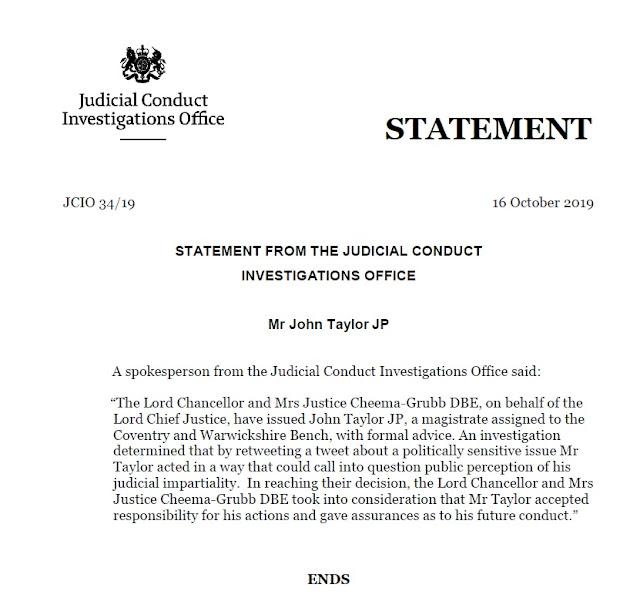 None but the participants will ever know the content of the tweet which apparently caused the offence nor will we ever know whether or not Mr Taylor JP decided not to risk his magisterial career by fighting the charge and agreed to the final outcome.  When the disgrace of possible removal from the magistracy is the Sword of Damocles hanging over every magistrate faced with the disciplinary process it is not unlikely that some (many?) "repent their sins" in agreement with an outcome which allows them to continue in post. This is rather like an equivocal  early guilty plea of which most readers will be familiar and which became more apparent after the imposition of the Criminal Courts Charge in 2015 the difference being that a bench in these circumstances would be wise to reject such a plea and substitute not guilty in its place.

Sad to say there is no organisation whose role is to act in the best interests of magistrates. Until such time the only term which can even loosely describe the current investigative process is The Spanish Inquisition.